Mini 2 dropped with no input

Hey guys. So i was fluing my mini 2 over a little lake in sports mode. All was good i got a great shot. Then as i was flying back it just dropped with no warning. I could not retrieve the drone. I did not touch the right stick at all. What happened? Thanks

Please upload your .txt log file to the following link and share a link to that back here if you wish others to take a look at your flight data.

First, it appears that you were flying in reverse stick mode. This is very rare to see and is sometimes difficult to correlate. Normally, 99% of the time, the Right Stick is Elevator and Aileron, with the Left stick being Throttle and Rudder. Yours are completely reversed, but that is an option so no fault of yours for that. Secondly, You were extremely close to the water. Too close for comfort in my opinion. You were traveling at a very high rate of speed at close proximity to the water, when you released elevator and the aircraft performed a very hard brake, pitching up then recovering for a brief few seconds. At the very last data point the aircraft was loosing altitude at which point the data ends. I have seen at least 2 Mini’s loose data transmission after such hard braking. Not saying that is the cause but it is possible. According to the GE profile it looks as though you did hit the water, but I will say the data does not exactly show that. But IMO, that looks to be what happened in this instance.
See Profile and Data below. Again, not confirmed, but probable. 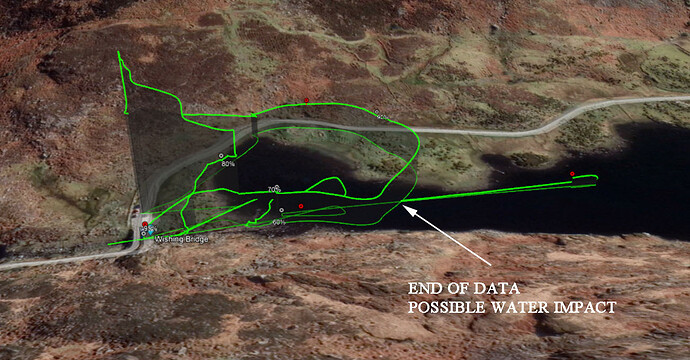 Thanks for the info. The thing is. We kept a visual at all times. And going forward it was all fine. How come it didnt do the same thing while going forward then? You think it was hard breaking that could have caused a signal loss? Ive been stopping like that in sports mode before and had no problems. So im not really sure why it acted that way. Its the first time me and my friend see a drone act in this way and hes been flying for a long time

And i was flying reverse because that how felt most natural

you think i coulda saved it with different controls? Thanks for your time

Kind of hard to keep a visual at 175 meters at basically water level with the terrain and water levels differing. At least from the GE standpoint. Especially with a Mini. That aside, Hard braking is never good for the aircraft. That can be adjusted in the app I would assume. At least that has been the case for most of the other aircraft. As I said, no fault of yours for the control reversal, that is the pilots option. But that is seen so rarely that most analysis software doesn’t account for that. Just for reference, braking that hard from a high rate of speed can damage a prop or most anything. Yes, It is designed to handle that, but only a few times and something will break most assuredly. You went from 56KMH to 0 in approximately 2 seconds…

I see. So at the end of the day it was my own rookie mistake right? For stopping so harsh? And why do you think no error messages came up? As if the drone thought it was fine? Thanks

So at the end of the day it was my own rookie mistake right?

Not Necessarily so. If there were a few seconds more of data, that would have helped.

And why do you think no error messages came up? As if the drone thought it was fine?

No messages came up because you lost transmission signal so quickly. And that is the reason the “direct” cause can’t be confirmed. I am only going by data that I have seen previously and the same occurred after very hard braking. This used to happen to P3’s as well and usually ejected a prop. Of coarse at higher altitude and additional data to confirm that.

Thats what im confused about. How come the data just stops before the drone died? Or is it just it didnt have enough time to sync?

Thats what im confused about. How come the data just stops before the drone died?

Not confusing really. Once you loose transmission signal, you also loose data transmission back to the remote, so the data ends at that point. The aircraft could still be airborne, but with no transmission or reception, no additional data. Additionally, it looks like you were recording video for the final 2 seconds of data. Did you happen to look at that? It will only be a few seconds long it appears.

Also my appologies for the image posted previously showing the flight profile. Where I show the flight ends is incorrect. It actually ends at the RED DOT farthest from your home point where you lost signal.
The profile was so low I couldn’t tell the elevation.

Thank you, Fly Dawg! This is a brilliant observation and one that I now (as of yesterday!) put this into practise. I’ve only just began flying, so I should be okay and I think I have only stressed the motors briefly? Everyday is a school day when you’re droning and advice like this is invaluable - thank you!
Lozza.

Welcome Benasluko!
I’m new to the drone scene myself, but there’s loads of advice to be had on here. Sorry to hear about your drone, but I hope your not too disheartened - don’t give up. My humble opinion is that you may have been flying in reverse, braked suddenly and the battery of the drone flew out? The battery doors are a little flimsy, imho. Don’t give up - it’s a great hobby!
Lozza.

Hi. Its a horrible way to learn a lesson

. I have been warning my friends to be even more careful with there minis now. You think i should just order a new one already? Or will dji help out in some way?

I honestly don’t know if DJI will help, but it’s worth an ask? I would get a new one anyway, but just put a little strip of Sellotape across the battery door each tie you change the battery - a pain in the ass I know, but it might save lots of money?

After talking with dji the last week they offered me a 40% discount on a new one. They said that if the dvs wasn’t working properly due to the water so its not there fault. Cant wait for the new one to come. Will not be making the same mistake

An Error in the VPS is quite possible, especially over water. It doesn’t respond well over water. I personally don’t think that is the “root” cause. The data really doesn’t reflect that. Here is your VPS vs Barometric Altitude. Bear in mind there are errors over water, but not with the barometric altitude.
Good luck with the new aircraft. Lessons learned.

Fantastic! So glad that you’re not disheartened!