First off, I’m very new to drones. Just got back from vacation in Oahu and had a super close call with my spark. Was in tripod mode, near a cliff over water, and all of a sudden the drone just started going down. I was able to steer it sideways and was extremely lucky that it crashed on the small section of the jagged cliff and could retrieve it. So…what went wrong? Just tried uploading my flight log but apparently no can do since I’m a new member…? I’ve reviewed the log and there were no error messages, 77% battery…the thing just started beeping and went down in an auto land. Looking for any thoughts as I obviously never want to experience that again.

The Spark descended because you had the throttle (left stick) in the down position. If you drag the green dot across the bar beneath the flight log map, you can see the positions of the sticks here: 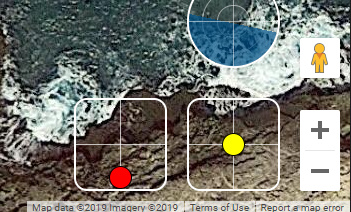 Thanks for the response. I did notice the downward throttle in the log and thought it was weird, as I def did not hold it down for that long. So, after replacing my broken propellers I took it out and tested this out. Looks like if I hold full throttle down for a sec or so, it comes down. If I hold up afterward it saves it. I know I tried throttling up prior to the crash, is there a time limit (say a few seconds) that I need to throttle up and get out of auto crash land mode?

I did notice the downward throttle in the log and thought it was weird, as I def did not hold it down for that long

Per the flight log, something was holding the stick in the downward position.

is there a time limit (say a few seconds) that I need to throttle up and get out of auto crash land mode?

The distance the Spark needs to stop depends on how fast it’s traveling and what mode you’re flying in. It would be best to test this outside so you can see how the Spark responds after releasing the throttle.

BTW, your Spark was not in auto crash land mode. It was simply descending because that’s what the remote controller was commanding it to do.

I did notice the downward throttle in the log and thought it was weird, as I def did not hold it down for that long.

Maybe this will make what @msinger was trying to tell you a bit visually clearer. In fact you gave down throttle for ~10 seconds. As was mentioned there was no “autoland” here. You brought the aircraft down yourself.

@elevesque2 is it possible you were attempting to fly the Spark backwards towards you. But, instead of pulling the elevator back you pulled the throttle back.

Thanks Fly Dawg and Bud. The data is the data, and totally understand what it’s showing. Question I’m having a very hard time with is, is it a true representation of what I experienced? To me, the answer is no. Sure I may have panicked for a sec but I know I pulled up on the stick, even had the wherewithal to maneuver it away from the edge and guide it to the right. Had this auto land thing happen on my first flight too, left a gimbal protector cap on and the Spark went up 15 feet or so and then just came down, somewhat controlled, but hard. Couldn’t recover it…suppose I should check that log too!

To me, the answer is no. Sure I may have panicked for a sec but I know I pulled up on the stick,

You did pull up on the stick, but not the throttle, it was the elevator ( In Black Below ).

Maybe this will show it better.

Graphic is super helpful! This is a great learning experience and was really hoping it was a user error that can be corrected and not some glitchy thing that is unpredictable. Thanks for being patient with me on this, as it appears I have a lot to learn. One thing I’m not clear on is the difference between throttle and elevator. Is the same up/down stick both a throttle and elevator? Also, looking at the manual, page 22, it says to be careful with tripod mode. So flying in high wind/over a cliff/water likely wasn’t the wisest of choices.