Phantom 3 Standard no-linky with a twist

Hey everybody… First time poster and obviously new to the forum. I’ll cut to the chase for your benefit and mine cuz this topic has been drug through the mud since the conception of the Phantom. First, used Phantom3 Standard purchased on Ebay for $98… drone only. No remote, charger, battery, nuthin… just the drone. Since that purchase I acquired all of the essentials to make it fly however, even though it wants to it won’t. I know that I wont have wifi with the camera and gimble (sp?) missing but I don’t care. All I wanna do is fly the sucker. No fancy video or pics. Just want to fly it.

Here’s a list that will hopefully give you enough information to maybe help me figure out what is probably operator error:

Any thoughts or ideas? I really want to get this in the air but I’m not putting another dime into it cuz so far, I fell like I may be trying to resurrect something that is too far gone to breathe again. My main drone is a spark but I was hoping to make up some of the cost of the spark by selling what I have purchased off the Phantom but I refuse to sell it unless I see it fly. Unless of course I get it in the air and love it so much that I can’t sell it. to be honest, that would be the happiest ending! Thanks in advance to any of you that can shed a little light on this for me (without posting the DJI “how to link your controller” vid. : )

By the way… the initial screen in the DJI app where ya select your aircraft at the very top says, “connect your device”. Down lower, below the picture of the P3S it says, “remote controller connected, connect your aircraft”. Not sure if that tid bit is useful at all but thought I’d mention it. Sorry for the length of my previous post but I wanted to be as detailed as possible so we can hopefully solve the issue in less than one page rather than typing one-liners for a few days.

Been reading a lot around here… More information than I could have imagined! TIA

Controller method will result in a 60 second time out if unsuccessful in linking and the S2/Dial
method will produce a relentless beeping from the controller until the battery dies.

if it needs some kind of firmware upgrade or
something I’m just ditching the sucker… Sucks cuz you can pick up a nice used Phantom3
Standard (with a camera, battery, remote, and charger) for about $300

Your issue is likely being caused by a firmware or hardware issue. If firmware, there is nothing you can do since you don’t have a gimbal. If hardware, you’re probably going to spend more than it’s worth trying to fix it.

I thought I read on here somewhere that someone successfully rewired and aftermarket GoPro gimbal to their phantom and was able to fly. is there any truth to that? And if so, are there wiring diagrams available anywhere? You’re righ though…purchasing a gimbal and camera is out of the question for this aircraft since I only paid $98 for the Drone. My guess is that without the gimbal and camera I will have a hard time selling it anyway. So maybe I hang on to it in case one day I can purchase a camera

What’s up with the blinking green binding or linking light? I can’t find any documentation on I it blinks green instead of red. Also their aircraft after starting up and going through its normal process indicates that it is ready to fly in either attitude or GPS mode. It says that my remote controller is connected but that I need to connect the aircraft. I’m assuming that’s with the Link light on the bottom which blinks green.

You could mount a 3rd party camera, but you won’t be able to connect it to the gimbal or see the live view in DJI GO.

What’s up with the blinking green binding or linking light?

I believe that’s an indicator of a firmware mismatch. If you had a camera/gimbal installed, the first thing I’d try is reinstalling the firmware to ensure all components are updated and running compatible versions.

The you guys figure this out. Cause i have the same problem. Is weird cause it acts like is connected. Going by color. Drone is flashing green but controller solid red. If you try to manually fly nothing. But here is the thing. If you turn controller off the drone will flash yellow and the linking button goes red. Turn controller back on wait for couples of minutes boon the drone is back at green but nothing. 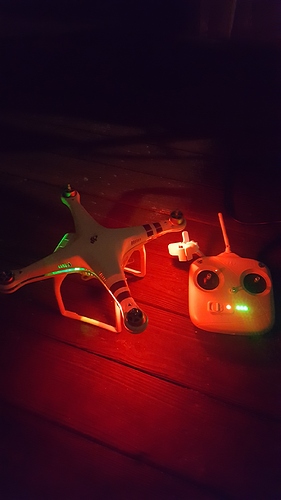 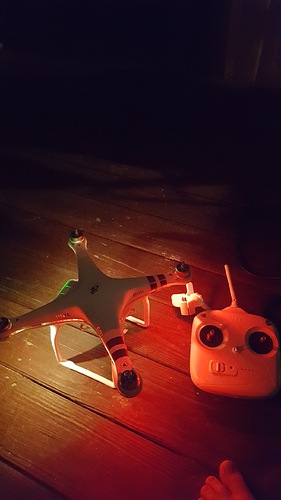