Hi all, not sure if I’m going about this right but I was using Precision Flight to map my neigborhood the other day. This was my 2nd mapping flight with the 1st one completing perfectly. This time I hit the “fly” icon and the drone launched to about 8ft and hovered. After a few seconds of hovering I may have tapped the stick to give it better clearance from a tree or it 1st twitched closer to the tree and then I tapped the stick. I can’t quite remember. Either way, it didn’t respond to me trying to move it over. I tapped the stick again and after a delay it twitched again closer to the tree. I’m getting nervous now because it should have launched straight up by now to begin the mission but it doesn’t. It drifts a bit more and is now under the canopy of the tree. I’m pulling down on the stick now trying to get it to land and it takes off at an angle and gets caught up in the tree. It gets turned upside down and promptly accelerates into the ground. think I’m I think I’m fully at fault here launching to close to obstacles, etc but I’m curious about the drones behavior and am hoping somebody can help me with the flight log. As I was using the Precision Flight(PF) app, DJI4go has no log. Neither does PF for whatever reason. I did pull the .dat files from the P4A and converted them to .csv files. There are two logs, 1 showing it hovering and the other after the crash…I think. I tried to upload the .csv file but no info is displayed when it finishes uploading. Can someone tell me the correct way to do this? Thank you for taking the time, Andrew

I tried to upload the .csv file but no info is displayed when it finishes uploading

I don’t know of any online log viewers that allow DAT log files and/or unpacked DAT log files to be uploaded. It would be best to view the data with CsvView.

Thanks for the info. Here is a link to the flight log.

Dropbox is a free service that lets you bring your photos, docs, and videos anywhere and share them easily. Never email yourself a file again!

What I’d like to know if possible is why it didn’t fly straight up like it’s supposed to and what the twitching was about which caused it to move under the tree canopy. Thanks in advance for taking the time to look at the log.

The section of the log below shows you had the throttle in the full down position while your Phantom was ascending and descending seemingly on its own. Your Phantom was flying a mission at the time, so that would explain how that uncommanded ascent/descent would have been possible.

Any reason why you didn’t toggle the flight mode switch on the remote controller to cancel the automated mission? Taking full control back would be the best thing to do if something like this ever happens again.

I suspect that the reason the P4A is ascending although the Throttle is full negative is that the Precision Flight is commanding it to do so. You have some control, but not full control. It’s possible that this can be seen in the .DAT. But, this requires that DatCon be run with the Engineered then DatDefined Parsing Option option 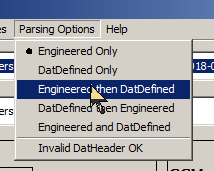 It would be easiest if you could provide the .DAT via Dropbox or similar. There may be other options that need to be used.
@msinger

Thanks msinger and BudWalker. I contacted DJI for repair and having educated myself a bit on what I was looking at in the log, it appeared that the stick was full up instead of full down like was the case. I wondered if the software was saying up if that appeared as me pushing up on the stick. Admittedly, once I was sure the drone wasn’t behaving like the previous mapping flight, the pressure builds and builds until I was a deer in the headlights so to speak. Toggling the flight mode didn’t occur to me. I thought about doing CSC, grabbing the landing gear and powering down the controller and before I could act it turned hedge trimmer. I shipped it off to DJI today and I will post back with the results. I have not approached PF to see what they can tell me. I did look on their site for info but couldn’t find word one about rogue behavior other than a general guide on emergency procedures. My main concern at this point is DJI interpretation of events. Obviously I’m hoping they will cover the repairs but either way, I learned some things. I will see what PF can tell me. Off the top of my head, it seems weird that stick commands wouldn’t override software commands. Thanks again and I will update with results.

FWIW here’s an update to my crash. Contacted PF and although I got quick replies to my emails they couldn’t tell me why my drone did what it did, primarily, why it moved without stick input from me. They thought the satellite count(8 or so) was low. No problem. Total cost to repair P4Adv was $188.00 which I didn’t think was terrible. That included the yaw and roll motor, upper cover, middle frame and both landing gear. Labor was 2hrs at $65p/hr. Not on the invoice but was replaced was the long camera cable and gimbal arm. Also, the sd reader wouldn’t format cards after the crash and that was fixed as well. Took about 3 weeks start to finish. On a side note, I was offered the DJI Care service and one thing I noticed under reasons why they wouldn’t replace a drone was the use of 3rd party flight software. I was under the impression 3rd party software, like Litchi, wasn’t a problem when making a warranty claim. Or maybe it’s not enforced? Anyway, hope this info is helpful.

I was offered the DJI Care service and one thing I noticed under reasons why they wouldn’t replace a drone was the use of 3rd party flight software. I was under the impression 3rd party software, like Litchi, wasn’t a problem when making a warranty claim