I had my first crash on a job a few weeks ago. I was doing a mapping mission with DD - altitude was set to 250’ AGL. General sequence of events was DD app crashed on my tablet, hit RTH on controller to no avail. Hit trees and got it back with the airframe broken, gimbal ripped off and the battery ejected (15’ from bird). One prop broken.

I am thinking we had our altitude set too low as the terrain varied quite a bit from the launch location. We have care refresh, so its on its way to DJI to be replaced/repaired.

Looking for more of an expert review of my logs to see what happened. I also have the DAT file and raw excel files available.

The .dat will be more usefull.

One thing i find interesting is that the failsafe says hover, but it was set to RTH if the RC signal was lost.

One thing i find interesting is that the failsafe says hover, but it was set to RTH if the RC signal was lost.

Indeed. It appears that it was set to “Hover” the oddity is immediately before impact it appears that setting was changed to “Land”.

Thats really weird. Is my thought correct that it hit a tree and then everything basically went to S? I suspect it was trying to continue the mission, but kept avoiding the trees at the same time. Really strange that the failsafe was not as i set it for.

I also seem to have lost RC connection, which obviously didn’t help things either.

RC:failSafe will have the value Hover until the value is required. Then it switches to the actual value - in this case Landing. Don’t why that is, but it’s the same for other DJI platforms.

Interesting and very odd that it was set like that. I requested that DJI do their flight log analysis as part of the repair as well.

Is my thought correct that it hit a tree and then everything basically went to S?

According to GE the impact point is ~ 180 ft above your launch point. So if you include the tree’s, I would say yes, you hit the trees.

Looks to me like the RC link was lost and the P4 landed into the trees. At 749.484 secs the link had gone to 0% and Landing was initiated. From there the horizontal velocity started dropping and the height dropped 2.3 meters over the next 2.6 secs. 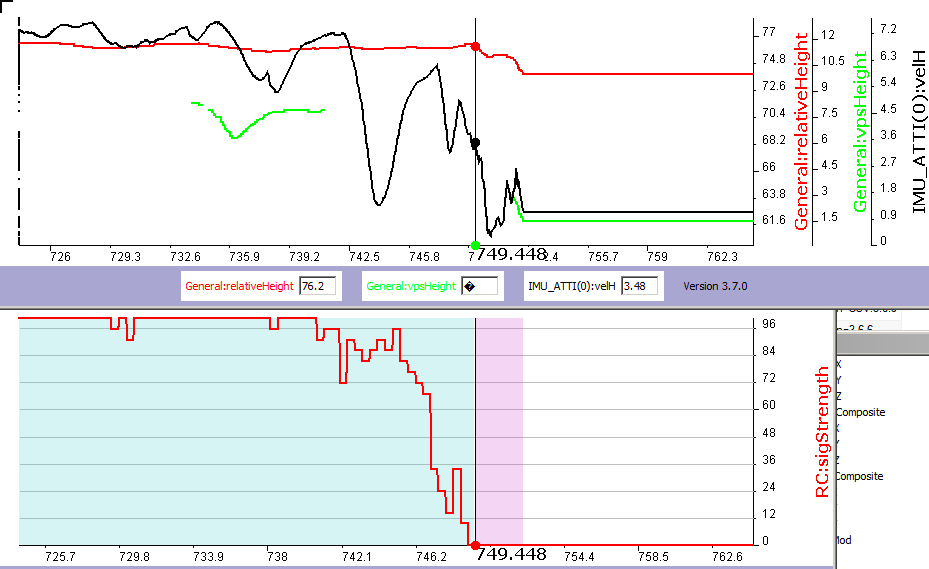 Bud - thanks for the insight. What I find weird is that the lost link behavior was set to RTH, not land. I am thinking there must be something going on with DD that may have told it to do this, which is not consistent with how it was set in the go4 app. Weird.

The P4 arrived at DJI today for their analysis and replacement. I’ll post what they come up with as well.

What I find weird is that the lost link behavior was set to RTH, not land.

I don’t think the landing would have mattered anyway. If you look at the elevation profile and your altitude as mentioned before. I think you would have hit the trees anyway, regardless of the landing. If those trees were over 50ft tall, most certainly.

I agree. It was really close. If it hadn’t descended it probably would’ve run into the trees sooner or later.

Right, but if it lost RC where it was presumably not in the trees it should have stopped and RTH, thus avoiding a crash.

I’m not upset with what happened - it was a learning experience. I was with one of our most senior pilots who was the VO. It was his call to drop our altitude for the mission from 280 to 250 to increase resolution of our map. Our drone program leader wasn’t upset either - he said you’re not flying enough unless you crash…it happens.

Made it just about a year with probably 40-50 hours of flight time till this incident. Just glad the only thing hurt was the bird.

Right, but if it lost RC where it was presumably not in the trees it should have stopped and RTH, thus avoiding a crash.

The aircraft hit the trees during the mission. The last turn around was impact, it appears. This is at the end…

This is the full profile of the mission. Signal loss was after impact.

Hopefully DJI Repair will cover this under warranty and not charge you the $99. I just had a P4A go kind of crazy on a Litchi mission. The repair invoice was $1231. DJI covered it under warranty. Lucky me I only had 2 weeks left. Fly Dawg did an great analysis in Phantom Pilots. https://phantompilots.com/threads/litchi-flight-phantom-4-a-did-not-return.146489/. The Phantom was found 8 days after the crash in a residence’s backyard 1700 ft beyond where we calculated it went down.

Their analysis was the same as here, we flew it too low and it hit a tree. Makes sense, but still sucks. Lesson learned. Not a huge loss - 99 bucks for a replacement.

Unrelated note: yesterday i successfully operated in the DC FRZ for an energy client. Flew basically all day with the M210 running thermal and other missions for mapping. Cold but great day - no incidents!

Congratulation on your successful day of flying. I have five DJI Drones insured with State Farm. $60 per year for all five, no deductible. A little over a year ago my P4P did not return on a long Litchi mission in a remote rugged terrain area. State Farm paid my purchase invoice price. They just renewed my policy with no problems.

Not a bad deal for insurance.