My first real flight of my new mavic mini today. I’m quite an experienced pilot with 3 years experience with a Phantom Pro + and bought this little drone because of it’s portability. Lovely calm day and took it to the local hill (well away from wifi interference. At about 5 minutes 20 seconds it just took off at speed, not responding to any controls. I pressed return to home which had no effect. It then spent some time blasting around the hilltop ( looking at the flight log https://www.phantomhelp.com/LogViewer/8LHC5EPX3WB1339OPTYG ) and eventually responded to the return to home. I landed it quicky and have been checking the forums ever since.
I’ve flown from this spot with my other drone lots of times and never had any problems. I spent 50min with dji online chat and they suggested starting a repair request. I’m reluctant to put it in the air again!

@~294 seconds you experienced an IMU positioning error. There were IMU velocity errors as well. Re-calibrate your IMU and that should help.

Thanks for looking at it Fly_Dawg. I did calibrate the IMU a couple of days ago. Weird that it suddenly showed this error after a fairly sedate flight for nearly 5 minutes! Thanks again 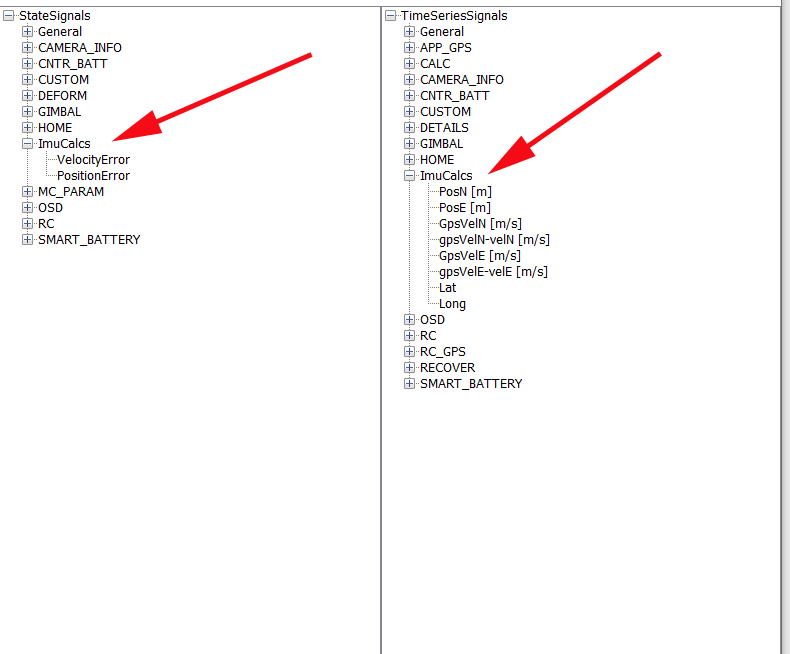 any idea? Oop, have found them.

And when exported as a CSV file i can see them as well.
Do you know wich parameter to use for the txttocsv converter programm on a command line action to export with the IMU calc values?

Do you know wich parameter to use for the txttocsv converter programm on a command line action to export with the IMU calc values?

I don’t export these. I simply graph them.

Oke, but when i use the TXTlogToCSVtool than the ImuCalcs Fields are not in the cvs, if i use CsvView to import txt file and export to csv the fields are included.
Uhh, who knows more about this…
Thanks anyway.
cheers
JJB

Oke, but when i use the TXTlogToCSVtool than the ImuCalcs Fields are not in the cvs

Correct. Those fields are custom to CsvView.

Question remain is if CsvView uses its own export routine or uses TxtToCsv to export into CSV…, so mayby an undocumented cmd line parameter to do this

@BudWalker See if you can answer the question from the OP when you get the chance.

The IMUCalcs stuff is computed by CsvView after it uses TXTlogToCSVtool to convert the .txt.

Thanks. so CsvView does export this data in the same csv format as the TXTlogToCSVtool.
Did put some own flights with no errors into CsvView and noticed some IMUcalc True values.
Lack of my knowledge this moment to understand the value of this True values in a good flight.
Tresshold values to narrow?
cheers JJB

Interesting file.
Just before the mishap drone heading 122, drone heading correspond to all the yaw inputs.
But yaw hdg value suddenly indicating left movement to hdg 162, 124,65 etc. But Gimbal yaw value remains thes same. Normally gimbal yayw follows drone hdg.
With no RC input drone should hover but started to fly away. My guess because position error, thus counter steering correcting wich are not right direction cause hdg data is wrong.At more less same time NotEnoughPower and drop in voltage.
My 2 cents : IMU gets wrong data or calculates good data to wrong results. See also the GPS speed calculated differts from original speed data in txt file, this indicates some kind of IMU errors.
See my chart, YAW line is yellow where no yaw input is given (so horizontal yaw line is good) 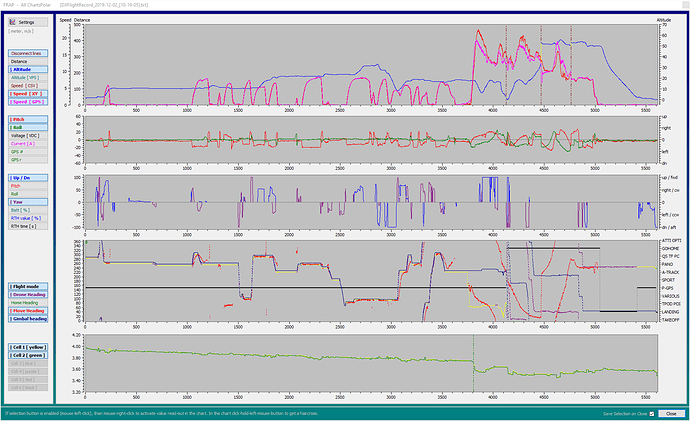 I’ve been meaning to document the IMUCalcs stuff, just haven’t had time lately. I’ll start with a rough draft here

The calculations are based on two separate data sets.

Ideally, integrating VelN and VelE should produce values that exactly match GpsLatitude and GpsLongitude. Also, differentiating the GpsLongitude and GpsLatitude values should produce values that exactly match the VelN and Vel values. When there is mismatch it’s usually caused by an incorrect Yaw value. In turn, an incorrect Yaw value can be caused by either 1) incorrect magnetometer data, or 2) the FC making incorrect decisions about how to compute Yaw.

The IMUCalcs does the integration and differentiation described above. It also compares the differentiated GPS position values against VelN and VelE. In the current flight it can be seen that the velocities start to diverge at about 380 secs

The Velocity and Position error signals become true when a threshold is exceeded. Presently, the velocity threshold is 3.5 m/s and the position threshold is 6 meters.

Thanks JJB. I can’t believe how much data you guys can extract from this tiny drone. Apple Store have taken ‘Psycho’ back and given me a full refund and it’s gone to their “recycling centre”. They don’t even bother sending back faulty drones to DJI. Problem now is the Fly More Combo Mavic Mini has sold out in the uk so I won’t be getting a replacement until the new year. Thanks again - I’ve learnt a lot by joining this forum.

Good action from DJI. I see few more MavicMini with the same errors at the DJI forum.
Uhh, i am waiting for my MM to drop at my doorstep. Have to be very carefull to see if my MM have this kind of errors, as they can be ‘killing’ the drone

This is why DJI needs to make attitude mode available to users of GO4 and FLY apps. If you could remove GPS from the picture, you might have been able to regain control much sooner.