Mavic Drop from 40 Feet to ground

Hi,
I wonder if anyone here can shed any light on this failure. I have probably done around 60 flights with this totalling around 100 miles. I have not had any crashes at all in 18 months I have had mavic and had full confidence in the Quad. 2 Days ago I carried out 3 flights 2 with Litchi on waypoint misson ofr 13 mins each of 3400m height between 50 and 30m. Compass was calibrate before 1st flight and conditions were sunny and wind of 13mph gusting to 18 for downward leg . KP1 and satellites around 20. Using carbon Fibre ABS composite props.Strobe on back of Mavic and for the 1st time on the Mavic TS88 GPS tracker on top of battery . This is 2.5 Inch diameter plastic case with GSM sim in it. Both there flights were flawlless with RTH at end as per mission though I had to correct landing as was little off. Landing on Landing pad was quite quick not like in DJI GO 4 with landing protection pause ( not sure if Litchi will support this). The Take off point was on concrete cinder area of taxiway of disused WWII airfield but compass calibration was done near edge of that. I decided to just had a 3 flight to lfy along old taxiway using DJI APP. Phone was stating CPU fully loaded. GPS tracker in sam point over battery clear of props held on with Rubber band not covering VPS sensors. Took off Mavic went to 9m as per precision landing Hompoint recorded with RTH of 40m. Flew out around 20m noticed error message on app regarding VPS possible fault. Mavic was drifting little in air . Decided was not happy with this flew our litle more over graas area then initated RTH mavic rose to 40m flew the short distance back rotated to face front and started autolanding sequence then all hell broke loose. Driffted forward 4ms or so decsending rapidly with motors spinning a lot and then dropped around 12m to cinder area. denting underneath bending 2 legs at front but no damaging anything else . Motors were still spinning on ground and front left arm folded back an blade snapped end as spun ober battery top. Shut down on CSC. Have checked log in Airdata and have Speed error warrning on there Motor blocked ESC no enough power. Motor Obstruced lots of those as on ground and a big deviation on cell 3 power. as well as satellite drop from 15-20 to 10 at 30 m or so. Last entry on logs when the quad is on ground thinks that its at height of 30 feet even though it was same height at Home point. At a loss to know why this has occurred . Have done lot of flights with this and been flawless will attach a link to DAT file if anyone can look at those of this and the long one before and logs. Any help on this would be awesome.

Were all of the props still attached?

@BudWalker and @sar104, any ideas on this one? Is this indicating a possible lost front, right prop?

This is a strange one. No evidence of a blocked motor or lost prop - all four motors just slowed down as commanded by the FC. At 107 seconds the motor currents all dropped to zero. The logged errors all occurred after impact at 110 s:

The only consistent explanation I can see is that the FC thought the aircraft had landed at around 106 s and cut the motor power to idle. There were some interesting log entries at the start of the flight that may suggest that the VPS system was not working.

If I can figure out how to post figures here I’ll add some graphs.

You should be able to upload attachments. 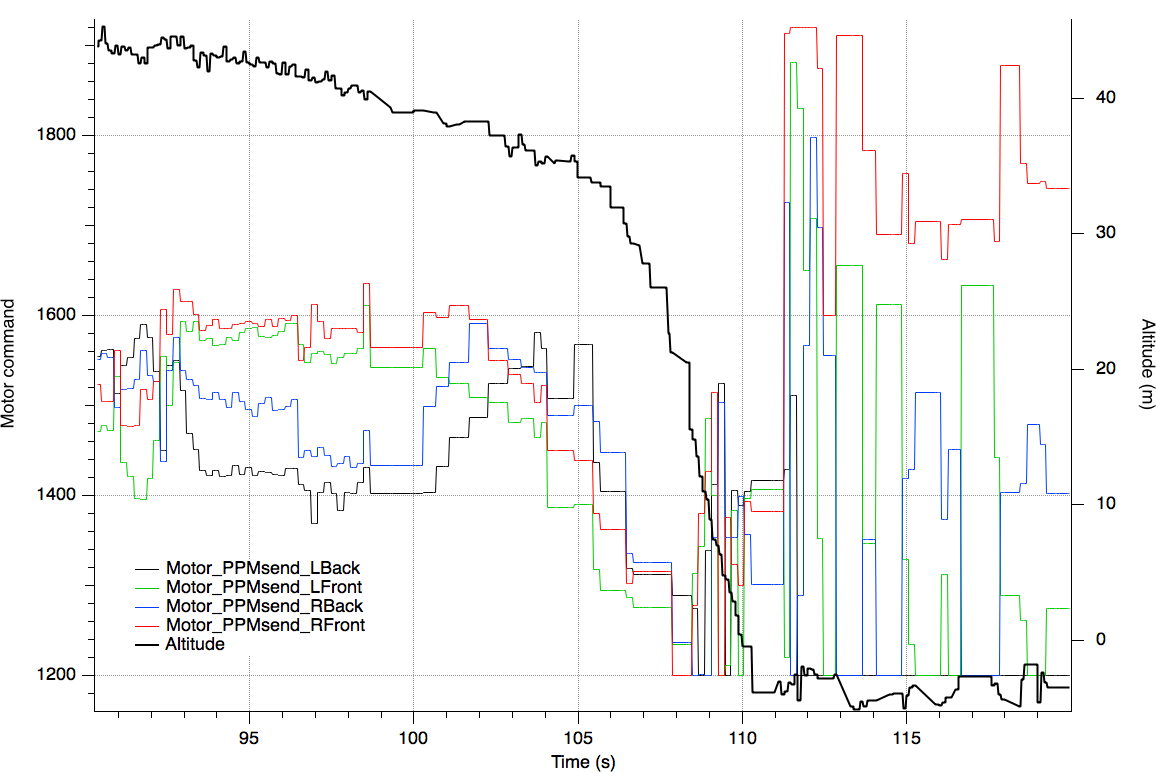 yes all props were still on and in fact all pretty much intact apart from when they were on the ground and one tip broke off due to spinning there on ground
They are carbon fibre composite so pretty strong. I have silicon feet on the Mavic and i think that provided some bounce and cushioning on the impact so only damage i have is dented and scaped heatsink and bent from feet which i will replace along with heatsink. Calibrated gimbal when home and after 2 attempts it caliibrated and IMU has calibrated

The only thing that come to mind about the Utltrasonic being stuck on is that I had GPS Tracket attached by elastic bands atop the battey and elastic bands under body . I made sure where they were passing under neath was clear of sensors in between them. It had been on for the other 2 long flights before but i have never used that on the mavic before only on Phantom 3 Pro on Carbon Fibre Cross Panel under the P3. So possibly the bands had slipped over but shouldnt the FC had ignored VPS and discounted it then?, I dd remember a quick message flash up and go about VPS on app.

I saw the motors slow almost to idle at that point as you say. In my Flight log on airdata there is major deviation in cell 3 this is original battery and has been charged around 40 times 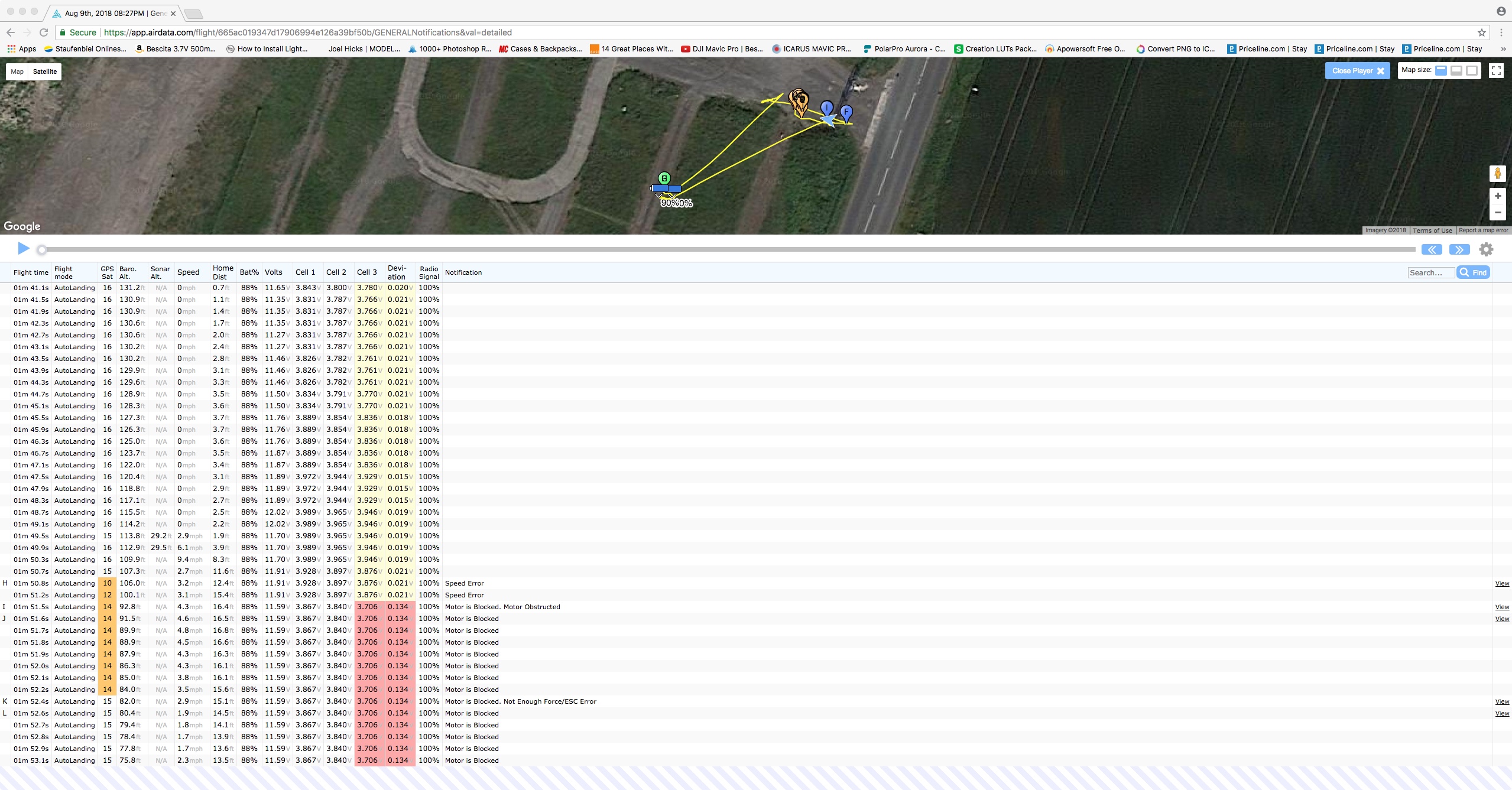 The cell deviation is not relevant - it occurred at 1 min 51 seconds after the aircraft hit the ground and esc4 stalled, pulling a large current.

Possibly, but I would not have expected it to cause this either. I’m really not sure what to make of this event.