I purchased a Mavic air on Sept 19 (so about 2 months ago). I have absolutely loved this thing and have flown it nearly every weekend that weather has permitted.
I totaled the drone today (I haven’t felt my heart drop like that in a long time…). I had flown it for a fairly successful and routine 6min flight nearby just a few minutes before this problematic flight. During the problem flight, I went straight up - nothing fancy. I noticed the drone starting to drift, so I tried to counter. That’s around when the drone starts blasting forward. I’m correcting hard, but with no success, still blasting forward. I panic and hit the return to home button, but the drone keeps going (hitting a building). I luckily recovered the drone - it had landed in an alley.

I know I should have waited until I had 11 satellites, but I had around 8 (climbing to 11 during the flight) and wasn’t receiving any kind of warnings on takeoff. Again, I don’t recall getting any warnings and saw that the drone was in GPS mode the whole time.

See the log and a video of crash below. 8.3s in the log roughly matches up with the start of the video. One thing I’m noticing is that the log shows the opposite craft orientation than reality. It shows it flying off backwards away from me - though you can clearly see from the video that was not the case. I feel like the controls just inverted at some point.

I can’t tell if hitting RTH actually did anything or if I had lost connection at that point. If it did trigger RTH, it definitely didn’t stop it from blasting into that alley.

I feel pretty horrible 1) because I loved this thing and 2) it could have hurt someone flying out of control like that. This could be my error, but I’ve flown this plenty at this point and it was a straight forward-and-up flight. Any ideas what went wrong? Any chance this could make a case for warranty coverage from DJI (I didn’t opt for DJI’s extra insurance)?

Interesting flight, seen this few time before in logs. My guess is that compass is 180 wrong.
So once it starts to correct its position it will steer the wrong way (this done by sw to keep gps position).
You applied aft stick to corrrect but in fact this was the ‘wrong’ correction as the drone thinks its 180 degree the other way flying.

Your did start your flight with 8 satellites and 2 bar for reception, so first part it was in OPTI mode.
But after 4 secs 3 for reception and LatLon positions were recorded.
IMO nothing to do with your compass.

At the end you selected Landing and not RTH. (soft buttons in the app should not be that close to each other, my tip: alsways use the RTH button on the RC!)

See the chart to see drone heading and moving values.

Question, in the log in the first record the LatLon HomePoint data is written, did you perform a compass calibration before this flight?

If you had done the after take-off checks, thus included the compass check (red arrow in the app) than you would have seen that the compass had a 180 degrees fault. 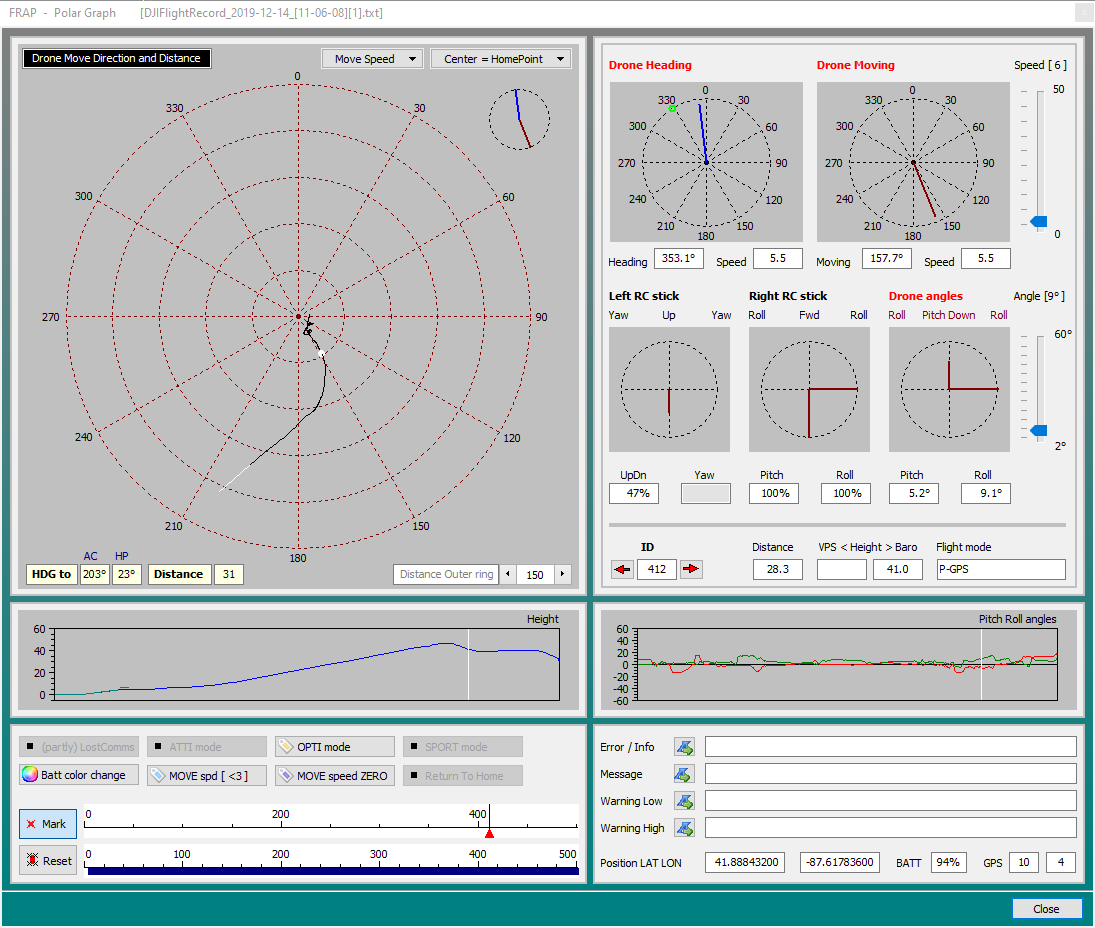 Thanks a lot for your response.
I did perform a compass calibration before the flight, but did not notice the inverted arrow on my map. I honestly didn’t know this was a thing that could happen, so definitely could have missed that.

You mention that the first part was in OPTI mode, but my app told me I was in GPS mode the whole time. Even if it was in OPTI then, with an inverted direction, why were my commands at the beginning of the flight interpreted correctly?

I could be wrong, but I fairly certain I hit the RTH button on the control (and not in the app). I was panicking and had already lost LOS, so just smashed what I could. Even if I did hit the land button in the app though, why would this result in immediate forward acceleration of the drone? It had GPS and I wasn’t sending movement commands - why not stop and land where it was?
It really felt like it was (incorrectly) over-correcting itself to try to maintain a GPS position or something.

Last question… How strong do you think my case is that this wasn’t (or at least fully) pilot error?

Not many drone pilots perform after takeoff checks, takes less minute so may i say lesson learned.

Yes, i know about app shows GPS mode, while actually it uses the vision to keep position.

If i am right about 180 compass fail than any input the sofware dictates or input by you is the wrong input and makes the situation worse. So drone gets more offset, needs more input etc etc, wrong direction etc etc, nothing you can about this do! Or one has to understand and start counter steering against the logical way to give RC input.

With no input at all drone will start to correct itself (keeping hover postion) and because of the compass error it will correct by steering and postions get worse and worse…as above.

In the flightog is written that the autolanding in the app has been activated and not the RTH button on the RC.

I am not to judge about pilot errors. Don`t know why the compass acted like this after the compass calibration. But calibration to be executed in a magnetic free area, and if indication was checked at ground (starting motors) and/or after takeoff than you could have spotted this and did not fly this flight.

If you can supply the .dat file from your mobile device, there is much more data there. You should be able to attach it here, but if not place it on a sharable site such as dropbox, etc…and share that link back here.
See this link for instructions to locate the file. You will be looking for FLY016.DAT.

Thanks for the instruction. I’ve uploaded the DAT file you mentioned to a dropbox below. The timing of the file creation doesn’t seem to match the flight, so hopefully it’s for the correct flight.
Dropbox with DAT file

At fwd input at start drone moved the opposite direction.
Interesting 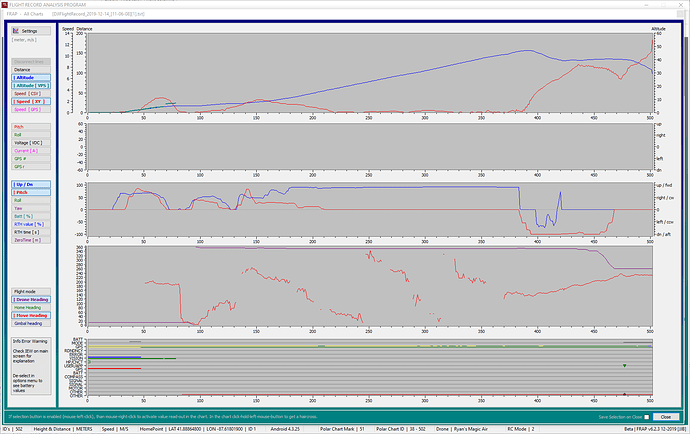 If you had done the after take-off checks, thus included the compass check (red arrow in the app) than you would have seen that the compass had a 180 degrees fault.

This check is best performed before launch because erratic flight might begin immediately after launch.

The .DAT shows that the mag data has the MA pointing 10° at launch 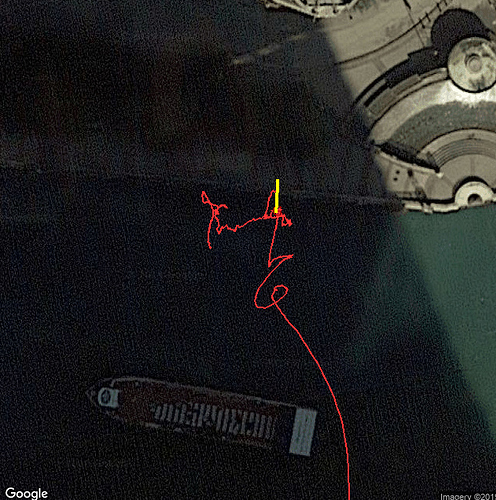 Got it, I will definitely never take that for granted again.
How, though, did forward stick movement at the beginning of the flight translate correctly to forward drone movement? I flew it up and forward over to the hover spot without issue, despite an apparently inverted compass.

Up elevator causes the back motors to increase and/or the front motors to decrease speed.
So it flew forward.The compass or Yaw value isn’t relevant here.

A compromised Yaw becomes a problem when the MA is attempting to correct it’s position.

Ok, but the logs show I was holding up and forward at takeoff. So by the logic of an inverted compass (and the later opposite world insanity), shouldn’t the drone of then flown up and towards me? If I had gone up alone, then perhaps uneven motor speed could be to blame. But I was actively moving forward.

Yes, you were holding forward elevator. That’s why the AC decreased the front motor speed which caused the AC to pitch down. So the AC moved forward in it’s frame of reference. As I said the Yaw value isn’t used here.

It’s like pressing the gas pedal in your car which then moves forward.