I’m new here to look for any help with diagnosing my Mavic Air.
My drone suddenly shuts down all four motors and drop dead, luckily the first time was from 5 feet.
Today fall was the forth time this week and cant get it why.
I have 3 batteries (20-25 cycles) and it happened with two of them (at 44, 48, 56 and 30%) .

Here is today’s flight log: https://www.phantomhelp.com/LogViewer/QUKJMNS4L5E8LCDV621N
It happened at 10:21s from 3 feet height. The drone stopped video recording, the motors were stopped too, but the drone was still powered on. That is why this time I put it back in the air without resetting and flew another 3 minutes without any problem. This can be seen in the dat file. https://www.dropbox.com/home/Public?preview=20-10-25-08-36-11_FLY099.DAT

If someone is willing to take a look at this it would be appreciated
Best regards, Peter

The Dropbox link doesn’t work for me. It appears to be pointing to your Dropbox folder. Can you try it again?

Today it happened again. Sudden motor stop and fall to the ground.
The only “anomaly” I could find is the current on both left motor, both of which I replaced after crash a few weeks ago.
You can see that after take-off the current go slowly up, but after the crash it’s more stable. 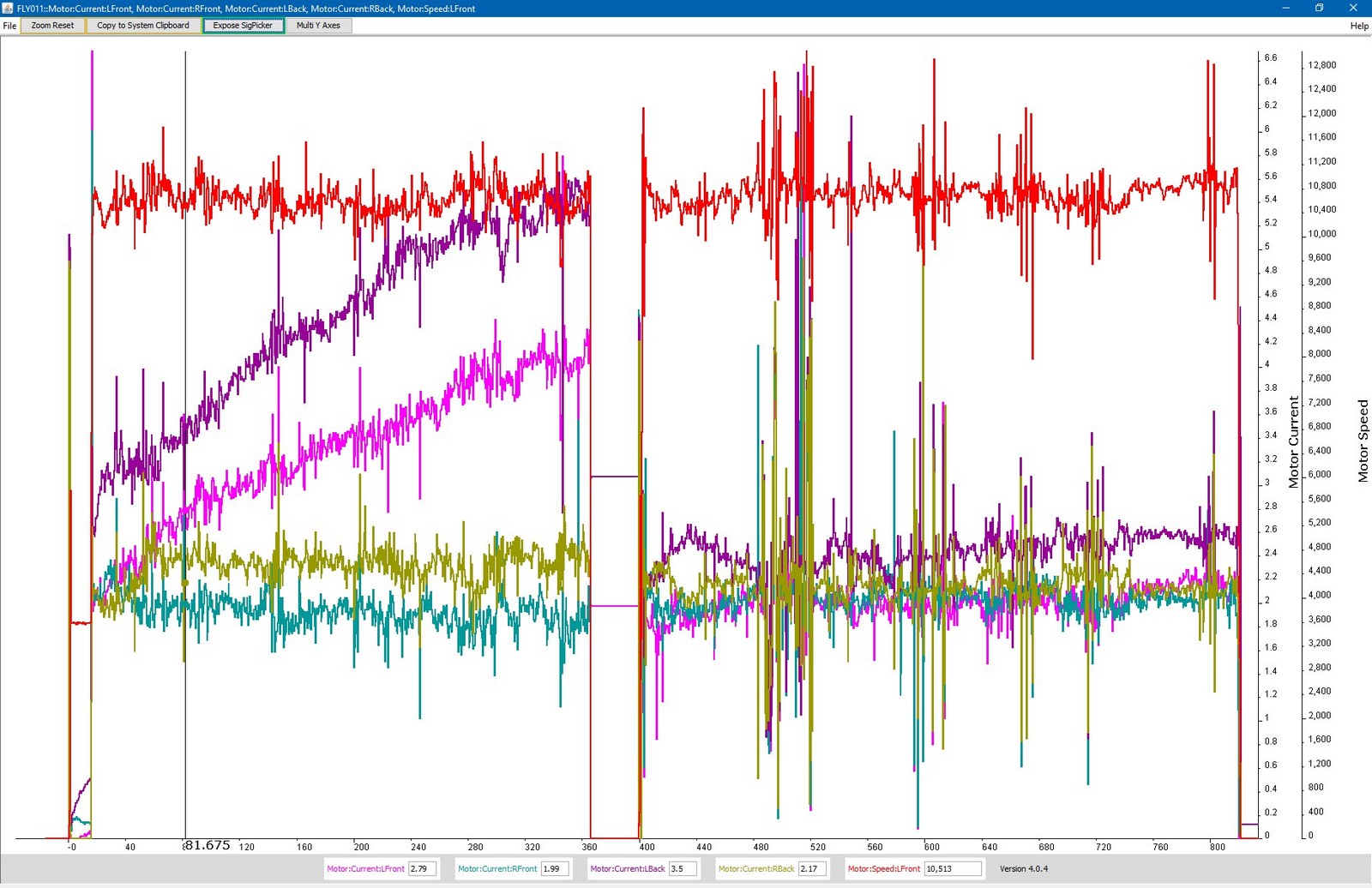 Esc(3) is the leftBack which had the highest current. Apparently some threshold was crossed and a stall was declared.

image938×414 7.1 KB
Both the front EscTemps are much higher than the back EscTemps. They should all be about the same.

I suspect it’s a HW issue that’s causing false indication from the current and temp sensors. Perhaps a loose connection?

I see. I was afraid of that esc(3) error.
Maybe I’m gonna replace the ESC power board and see if it solves this.
Thanks again for your time.
Best regards, Peter

Was going to take a look at this the other day when you first posted. I did look at the .txt log but did not see anything unusual. As @BudWalker mentioned, you possibly could have a loose connection in the motors you replaced. You didn’t happen to use splices did you? From others who have done similar operations, splices are a big NO NO. Direct soldering is required both on motor side and ESC connections. Just offering a suggestion.

Hi @Fly_Dawg
I replaced both left arms and I did solder them directly on board as they were.
Will recheck everything as @BudWalker said, to see if left any loose connections.

Update:
After checking all my solder point I found the culprit.
@BudWalker was right, it’s a hardware issue. A small hole in one IC.
I’m even surprised how it flew this long. 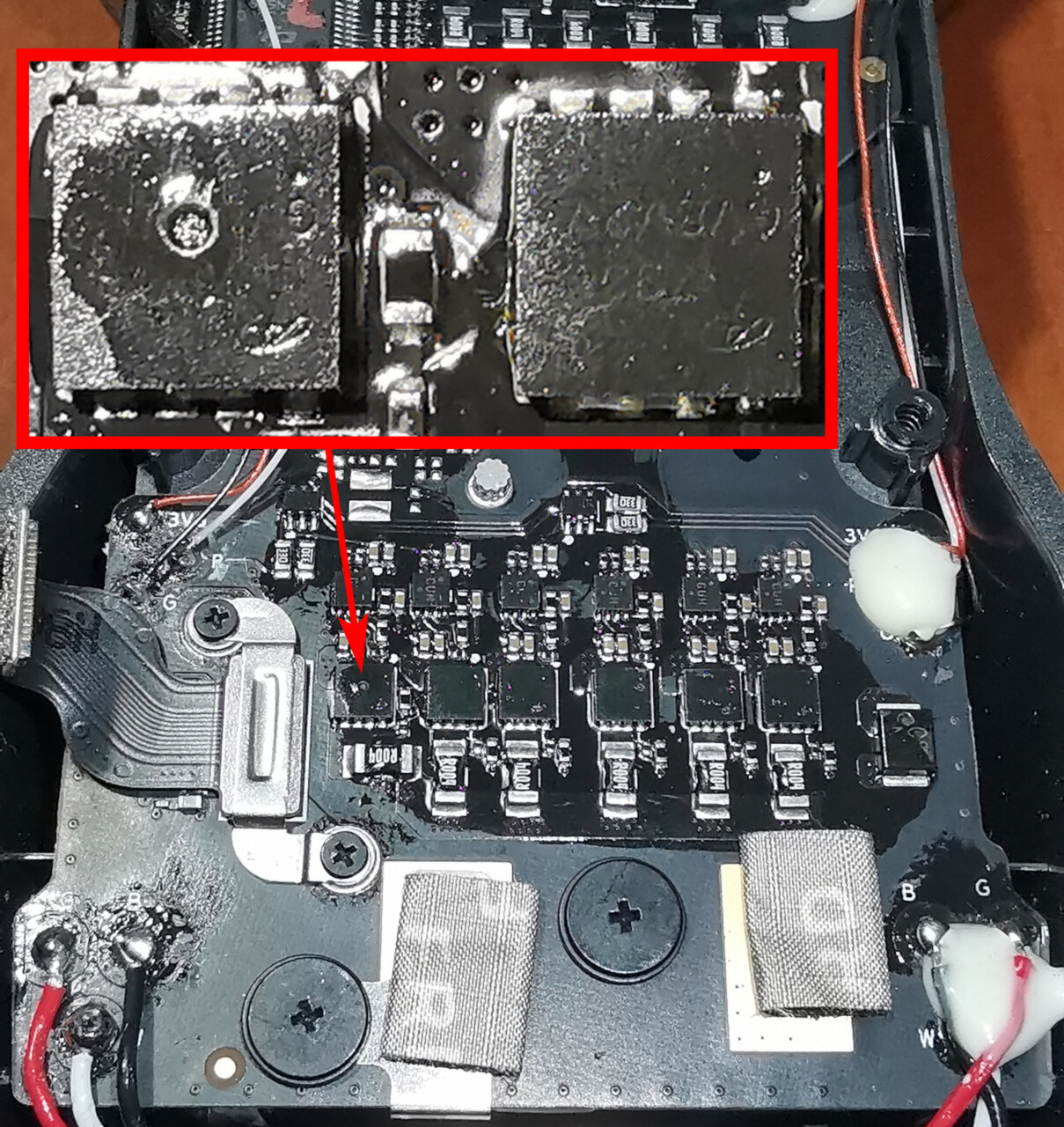 A new ESC board will solve this issue.
Thanks again for diagnosing this power cut-off problem.

It’s hard to tell from the image. Does it look like a manufacturing defect, or more like it happened since it was installed? It almost looks like it was punched or drilled into.