Crashed and lost my Mavic Air. My fault on its first impact to the cliff wall.

I saw it bounced off the wall, and I entered a Right input…however, the drone still drifted into the wall, and I let go of controls to neutral. Drone moved backwards and crashed for good.

My question is…why did the drone drift left towards the wall when I entered right input? Is it drone fault?

why did the drone drift left towards the wall when I entered right input?

It appears it was drifting to the left for the remainder of the flight after it crashed into the wall (even during the times the sticks were in the center). Perhaps the props were damaged and it was not able to stabilize itself.

There is a theory that when it is near a vertical surface, it will tend to get sucked in.
I observed this when I flew the P3 near a plastic fence, when I pushed forward, it still moved backwards towards the fence.

There is a theory that when it is near a vertical surface, it will tend to get sucked in.

I’m not aware of that issue, but it could be a possibility.

In the section of the flight log below, you can see the aircraft roll changed right after you moved the stick to the right. However, the roll moved to the opposite direction 0.9 seconds later. That happened right when the downward sensors started to detect the ground. Perhaps the aircraft was attempting to use the downward sensors to hold its position and wasn’t able to do it well due to the lack of a well defined pattern in the rocks. 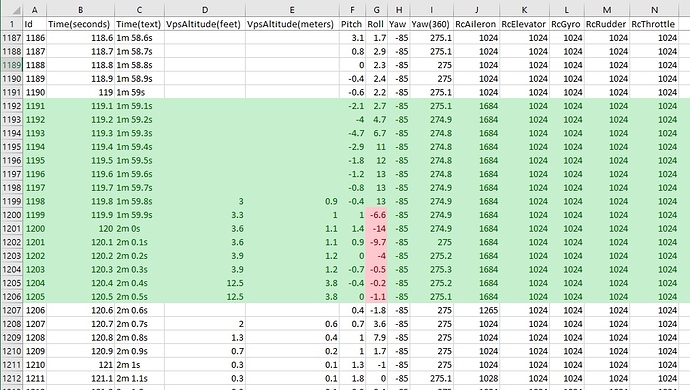 Thanks man! Appreciate the analysis!