some how i lost it duno how i hit the only patch of woods in a city.

any help would be amazing!!

Before going through this data, I would just like to say that you probably deserved to lose it flying at over twice the legal altitude per FAA regs. Especially being so close to HAF. I will look further however.

You made many mistakes in this flight. I don’t see that you will be able to recover it. At its last position it was over the marshes at over 1300ft and the winds were apparently very strong. Even much more so at that altitude. Here is the last known position. It would not have made The return flight because the flight speed of RTH is quite slow and the winds were too strong. 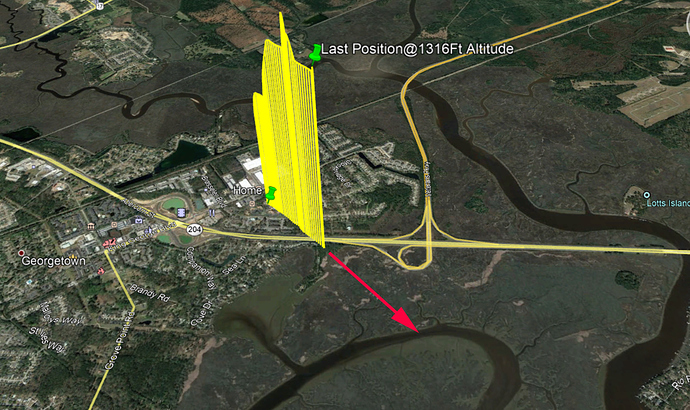 i agree i had no plans of taking it out that far. wind grabbed it and i hit the RTH but it was not returning…

my thing is i watching it go all the way to 11% battery before all feeds where dead. not second guessing your pin point but whats the search area size for the location you have marked?

Something has to be off… cause right before I lost signal it dropped to 300ft and 11 percent battery. Is what the remote was telling me… I didn’t have connection to my phone. But remote was connected afterwards. So could there be another flight log in the remote ?

Not certain of another Mavic Log, other than a possible device .dat, but that would end the same as this one. The last entry on this log is 74% battery. The aircraft was drifting in the direction of the red arrow above. Without knowing the actual location where you saw 11% battery there is no way to give you a good estimate on where you might locate it. However, going on the assumption that you gave no control inputs after the data stream ended and with 74% battery, drifting at approx 10ft/sec and approx 800 sec of useful battery time, that is quite a long drift before the battery was low enough for auto land. It could be up to 2 miles in the direction of the red arrow, and even further with higher winds. I do not think there is another log in the controller itself. There could be another .txt log, if you ever re-aquired with your phone connected.

At the end of your flight log, the Mavic was at an altitude of 1,316 feet and ascending up to 1,640 feet (your set RTH altitude) so it could start returning home. It was slowly drifting away from the home point while it was ascending.

Since it was returning home, it would have continued attempting to return home until it reached the critically low battery and started auto landing at its current location. According to your flight log, it would have been in the air for about 9.5 minutes before it landed. Unfortunately, there is no way to know if it made forward progress toward the home point or continued to drift further away from the home point.

You can draw a line from the last point (31.984017, -81.207076) to the home point and follow it to see if it landed anywhere in between its last location and the home point. If you don’t find it, then start searching from the last point toward the direction it was drifting at the end of the flight log. At the speed it was likely traveling, it could have drifted for up to ~2 miles before it finally landed.

Yes, it did seem to be holding its position a little better. Unfortunately, it still had to climb another 300 feet – where the wind was likely even stronger. 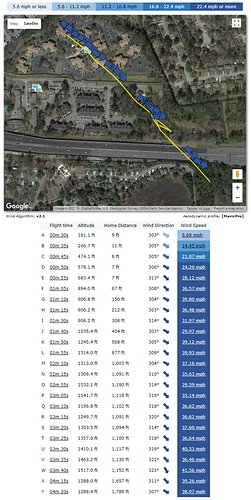 So here is the real question should I buy the m2zoom or pro platinum? Heading to bestbuy

If the cost doesn’t matter? I’d buy the Mavic 2 Zoom. It’s built better than the Mavic Pro Platinum and packed with extra features.

Sell it on eBay.

One of the biggest mistakes was setting the RTH altitude to the absolute max of 500 meters. These aircraft do not operate like toys, and there are regulations to adhere to.

There are currently no altitude restrictions in the US for hobbyists. The new 400 foot restriction will be in place soon though. The current rules certainly do require pilots to fly within VLOS. 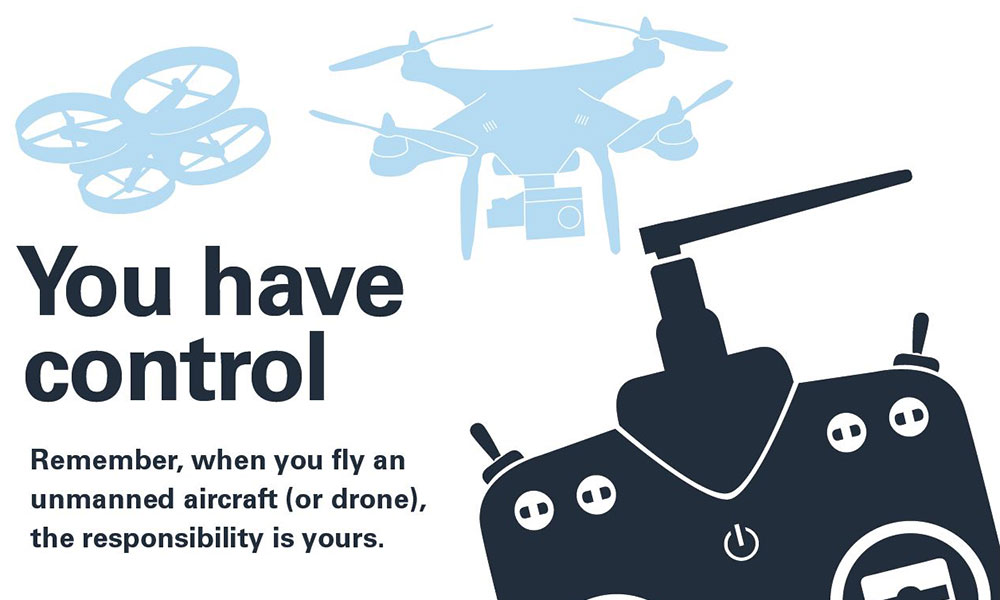 Rules to follow when flying drones in the US

Overview of hobby flying rules When flying as a hobbyist in the US, you must follow the rules (US law) from the Special Rule for Model Aircraft. Those rules currently include the following: Fly only for hobby or recreation Follow the safety...

I realize that. An FAA “Recommendation”, I consider as just that, however observing those is part of being a responsible pilot. A bit like observing the speed limit, which are actual laws and fine if you don’t get caught doing so. You don’t have to school me on Regs. I’m used to it.

You don’t have to school me on Regs

Sorry – didn’t mean to make you think I was schooling you. I was just sharing some more information since your statement about adhering to the regulations was a little vague.