Lost connection over a river and the drone disappeared

I was flying my Mavic Air this morning over a river and after around 5 minutes of uneventful flight I lost connection of the aircraft. Moved to the other side of the bridge thinking that the medieval stony bridge could be the cause of the failed connection, but when I arrived to the other side I could not find the aircraft nor gain connection again. Can you please review the flight log just to understand what has happened?

Any clues on why I lost connection?

I’ve contacted DJI to find out if there’s any possibility of getting a new aircraft and there is a case opened. Will have to wait a little bit until I have news from them.

Thanks for your help.

Any clues on why I lost connection?

There could have been interference near the remote controller (if you had any other electronic devices nearby) or interference coming from the nearby houses since your Mavic Air was flying close to the ground. However, I think it’s more likely that the bridge was blocking the signal since you were standing on one side and your Mavic Air was flying low to the ground (water) on the other side.

You were flying in an open location, had the RTH altitude set to 30 meters (should have been high enough to clear the bridge), and had plenty of battery power remaining at the end of your flight log. Since you did not see your Mavic Air fly back toward the bridge, I’m guessing you continued to control it after you lost the video and crashed into one of the trees on the side of the river. Maybe try looking for it in this location: 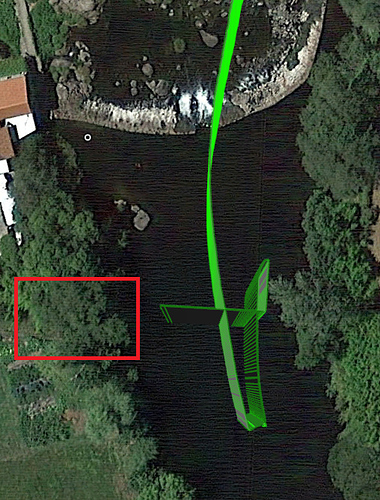 Msinger is correct. Your hard turn just before signal loss was approximately 2 seconds in duration and you were holding the aileron full over. Estimating the time, distance and speed you would have hit the trees in approximately 2 seconds after signal loss, assuming you maintained the turn for 2 more seconds. Unfortunately, this appears to be completely pilot error and no fault of the aircraft. 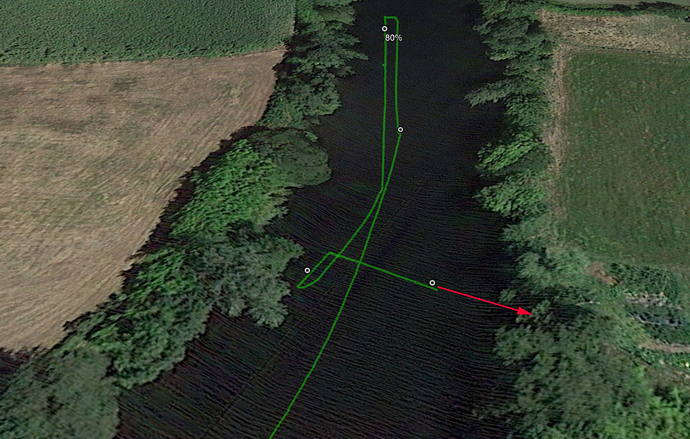