Today I saw on YouTube on the HATU channel, a test on the RTH in case of disconnection of the station. In the MAVIC manual I read something long ago. And it is the following, if for whatever reason, the station loses the connection with the MAVIC, the system executes an RTH. The drone returns to the takeoff area. We already know that all, but the peculiarity is that if we have flown let’s say that making a zig zag, a trip that was not in a straight line, the drone will return along the same road, in zig zag, square, it does not matter. Imagine that we have driven dodging trees, poles, etc., when you return will make the same journey. But it seems that the drone when the RTH begins, rises to the configured height and then makes the journey for 60 seconds, in the same way. From there, it is still in a straight line to the place of takeoff. Any clarification ?? Regards

Right, the Mavic will try to retrace the previous flight path for about 60 seconds to attempt to reconnect the remote controller. If that fails, it will return back to the home point in a straight line (like it normally does). For that reason, you should make sure you have the RTH Altitude set to a height that will allow the Mavic to avoid any obstacles in the area on its way back to the home point.

If you’re flying in an area that has a lot of obstacles and fear the Mavic might crash if it needs to return home, you could set the “Remote Controller Signal Lost” setting to “Hover” or “Landing” instead. The Landing setting would of course only be a good option if you can ensure the area below the Mavic will be a safe place to land no matter where the remote controller signal disconnects. 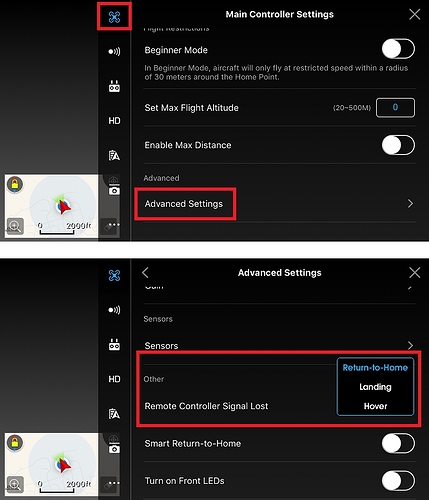 Understood, it’s only for 60 seconds. If it were more and the route had been a lot of movement, not in a straight line, and the battery was low … Thank you very much

The goal is obviously reconnection ASAP, to allow you to take over control again, to avoid a completely autonomous RTH, which might not succeed.

Per the Mavic 2 manual:

Unless it’s undocumented, I don’t think the Mavic will bypass the retracing if the battery is low.

In mavic air, that opportunity after signal lost is VERY PRECIOUS.
i dont know whats dynamically transceiving between broken pair yet it comes back online, never missed resumption pairing. Cancel rth, manual control, journey resume and complete.
I would cringe for non-return of signal lost, has never occurred.