The Phantom 3 Standard gimbal lock works very well once you get it into place, but it’s quite the hassle to slide on and off of the camera. This problem can be easily fixed by removing the four raised areas that slide against the top and bottom of the camera (see the image below). To remove them, cut the plastic away with a utility knife and use a fine grit sandpaper (e.g. 400 grit) to smooth the surface to prevent any uneven areas from scratching the surface of the camera. 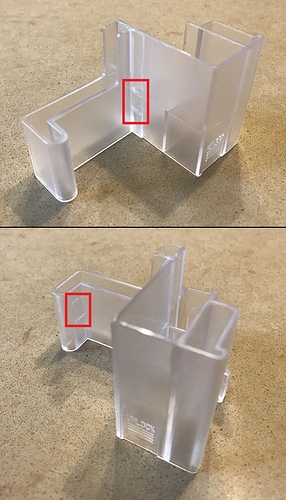 Them small ribs are for the friction to hold it in place…Id advise Not to alter them… to remove the gimbal lock…lay the drone carefully on the opposite side…hold the camera and pull gently on the gimbal lock to remove it and reverse the procedure to replace it…i have painted the vertical part red to make it much much easier to slip in the gimbals small channel…Good Luck what ever you decide to do.

Yep, I think that was the idea anyhow. My gimbal lock holds in place just as well with those ribs removed.