Dear community any insight with this following issue would be greatly appreciated. I had an issue where upon landing the DJI Spark drone it had said “compass error” and the aircraft took off horizontally and went missing. Here is the narrative of what happened.

On November 23, 2019 I flew my DJI Spark drone over a construction site near a residential neighborhood a few towns from where I live in Fair Lawn, New Jersey. It was a normal flight and I brought it back close to the original landing point just in time for when it reached 20% battery. I initiated the return to home sequence (like I usually do to get the aircraft in the general landing area before I take over and land manually to avoid obstacles like telephone wires and tree branches). The altitude was around 170 feet and as it began to ascend it said “weak GPS signal” followed by the messages:

It then took off horizontally away from the launch site, towards the next street over. I went running after it through a parking lot that cut through the block, but lost visual on it because of the trees. I then received the following prompts:

The battery then said it was critically low and said only had enough power to return to home. I saw an image of a house near where I launched from but the video feed was laggy so I wasn’t sure if it was a live image or a previous image.

Due to the image, I ran back to the original street I launched from thinking it was landing there, but I still had no visual and the aircraft said it disconnected at 17 feet altitude. It has been missing ever since. I have looked for it for the last two days but have not found it. I can’t comprehend what would have went wrong or where exactly it could have ended up. I rang doorbells and checked property owners’ back yards but found nothing. There are some large evergreen shrubs, about 10 feet high by about 8 feet wide, that I can barely see inside because of the density of the branches.

Aside from the mechanical error that was out of my control, one of the other things that are confusing me is that while the aircraft stated that it hovered at around 2.5 feet from the launch point, it never recorded its veering off course that sent me running to the next block over (this is most likely because the GPS malfunctioned). Even the horizontal speed spiked for a few seconds all the way up to 17 mph yet there was no movement tracked in the flight record. It would seem that the aircraft couldn’t determine where it was so it just stated that it was 2.5 feet from the launch point because that was the last known point before it malfunctioned.

And the final observation is that while I shot a handful of videos of the flight none of them ended up getting saved in my video album. The photos only have thumbnails that when you click on them it prompts you to download the photos from the drone. What gets me the most is that I basically got nothing in return from this flight, which ended up in the loss of the drone.

You are wasting your breath without a link to your flight logs. Uploaded to the Log Viewer or shared via link is what would be needed. Otherwise, revert to my first sentence. No, offence intended as we all would like to give you information on your incident.

Thank for replying. How can I upload my flight log? I have it downloaded from the app as a text document. I didn’t see a way for anything to be uploaded.

I just figured out how to upload flight log. Here is a link to it:

According to the logs, the aircraft experienced an IMU positioning error intermittantly well before the ATTI switch. That said, it did eventually auto-switch. The “Took off to the next street” statement was due to 2 factors. (1) When the aircraft is in ATTI mode there is no GPS positioning. Only the barometer for altitude hold. The aircraft will drift with the wind if you have not experienced ATTI flying. (2) There were 2 brief elevator inputs at the initial drift point which enhanced the speed ( As shown in the graph below ) The reason for the ATTI switch was that you navhealth and satnum dropped to zero. ( These are different than sat counts).

As far as location, the aircraft was autolanding at the end of the log and was last reported at ~17ft at this spot. It should be within the area of the red circle. 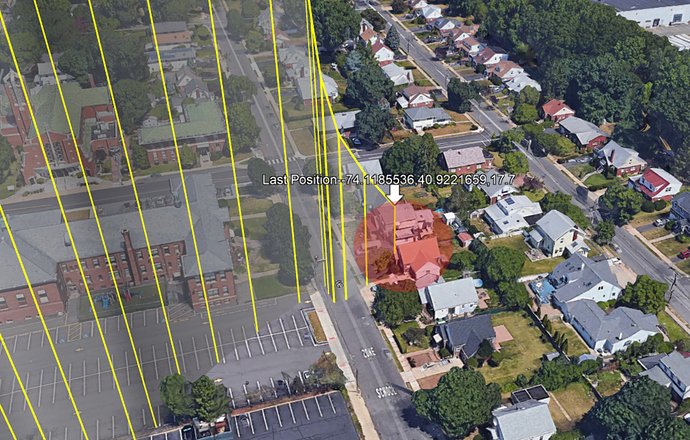 As far as location, the aircraft was last reported at ~17ft at the spot below. It should be in the area of the red circle.

How accurate is the position of the drone leading up to the final moments? Is it spot on or just approximate? Also what do you make that the drone stopped recording at 8% and at 17 feet? Does that mean the battery just gave out or that it crashed? I went to the neighborhood today but could only get access to the yard of the house on the left of the red circle, the other one didn’t answer the door. I will try back later on.

How accurate is the position of the drone leading up to the final moments? Is it spot on or just approximate?

Generally speaking it is usually accurate to within 10ft or less, but that also depends on the GE render, so always allow for some error.

Also what do you make that the drone stopped recording at 8% and at 17 feet? Does that mean the battery just gave out or that it crashed?

Hard to say, it could be the battery, or it could be simply lost downlink. Either way the results are basically the same as far as location goes.

I see. So basically there is no way that the drone could have ended up anywhere outside of the area you shaded? If it fell it would have just went straight down, not that it would have continued on and ended up on the next block or even in the back yards of the houses behind Summit Ave?

Also any idea what would have caused this to happen? It just happened so unexpectedly. The one thing that irks me the most is how to prevent this from happening again or what signs to watch out for. I have always felt safe and secure while flying the Spark, but now I feel like my confidence has been shaken.

I see. So basically there is no way that the drone could have ended up anywhere outside of the area you shaded?

Not during an autoland sequence, no. The only variable there is altitude and wind. The aircraft would have continued the descent, from its autoland issuance.

Also any idea what would have caused this to happen? It just happened so unexpectedly. The one thing that irks me the most is how to prevent this from happening again or what signs to watch out for.

Below is your launch point, according to the logs. Was this actually on a sidewalk, or was it on the hardened pavement? Either way, any sort of re-inforcing re-bar or metal under the launch point can cause the compass to become “ary” for lack of a better word. Prior to takeoff you should always look at your directional icon in the app and ensure that the direction the aircraft is facing in relation to that is accurate. That is really the only way to know for sure. Also, when in storage or travel, keep the aircraft away from anything “magnetic”. This will distort any calibrations. Even speakers have magnets so that is something to be wary of. 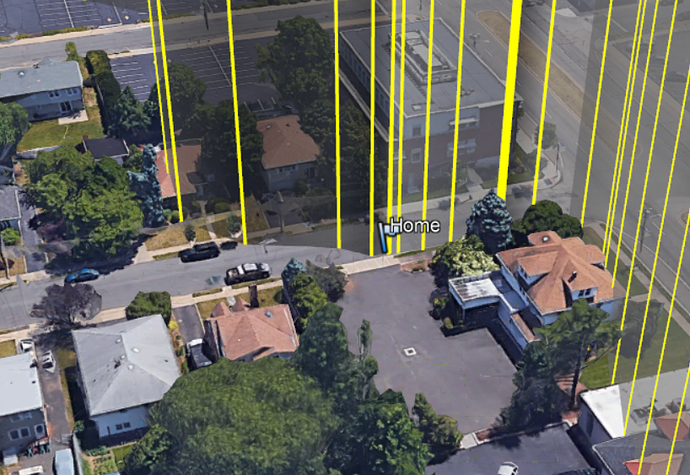 The aircraft was launched from the public sidewalk there not the parking lot. So the bottom line here is that the aircraft definitely malfunctioned? If I understand correct, there is nothing I could have done to prevent it nor could I have done anything to stop it once the malfunction occurred. I feel that even if I recovered it and that it wasn’t totally destroyed, that I wouldn’t trust the aircraft anymore to not have it happen again.

If I understand correct, there is nothing I could have done to prevent it

There are ways to avoid but not totally prevent. These errors occur more often than one might think. But they are avoidable, to a certain extent. I really don’t consider this an aircraft “malfunction”. After the errors occurred the aircraft did exactly what it was designed to do. " Switch to ATTI mode" due to an inconsistancy between the IMU and Compass. GPS was still available, however the IMU and FC computes these values to determine the confidence level in location and position. If these are off significantly this is what occurs. Flying in ATTI mode is much more difficult, but can be controlled assuming light winds and operator knowledge of flying without location data. If you have ever flown a smaller aircraft with no GPS at all, it would operate basically the same and is completely recovereable given VLOS. Any inputs here @msinger?

I have flown before in ATTI mode without issue. The main thing that gets me is how it took off at 16-17mph in a wayward direction away from the launch/home point and then landed/crashed where it wanted.

What do you make of the battery stopping recording flight info at 8%? Is this typical or do the batteries usually record data until 1%?

What do you make of the battery stopping recording flight info at 8%? Is this typical or do the batteries usually record data until 1%?

That percentage you see is a calculation. The battery could shut off at any time depending on the individual cell values. If you have looked before at imbalanced batteries you will know what I am saying.

That percentage can vary. You never take those for exact.

Well some excellent news all, the drone was found!!! And Fly_Dawg thanks to your analysis it was recovered at the exact address you highlighted. I rang all the doorbells on the block last week and I made up fliers to leave in people’s mailboxes that weren’t home.

One night I got a call from the one homeowner that received my flier. He said “I found your drone on my front sidewalk,” and that he saw on high surveillance cameras that it descended to about three feet and hovered until it hit the railing on his front steps and then fell to the ground. Miraculously, the only casualty to it was a broken propeller and it still powered on even though it was out in heavy rain for 24 hours! There are still good people in the world and now I can sleep at night because the mystery was solved!

However I am still concerned about flying it now because I don’t want it to happen again. I don’t know if it is now defective or not but I definitely wouldn’t want to go thru this again. Could the aircraft now be defective? Any and all thoughts appreciated.