The FAA is proposing new drone regulations. They are asking for comments from drone operators, particularly commercial and fleet operators. ALL COMMENTS MUST BE SUBMITTED BY APRIL 15th. Any thoughts on what suggestions we should submit? I am just a hobby operator, and don’t fly as much as I would like, because of all the restricted airspace close to me. I certainly don’t want more cumbersome restrictions, but I know that more regulation is necessary.

More details can be found here in the DJI newsroom:
https://www.dji.com/newsroom/news/dji-urges-drone-operators-to-comment-on-proposed-faa-rules

I reviewed the proposed rules and summarized it into these main points:

Any thoughts on what suggestions we should submit?

If you’re not flying under Part 107 (and never plan to) and don’t want to stop the FAA from forcing manufacturers to make their drones safer for operations that involve flying over people, then there is likely no benefit to you commenting.

I submitted what I thought was a complete and thurough application for a night waiver and got this letter back from the FAA. 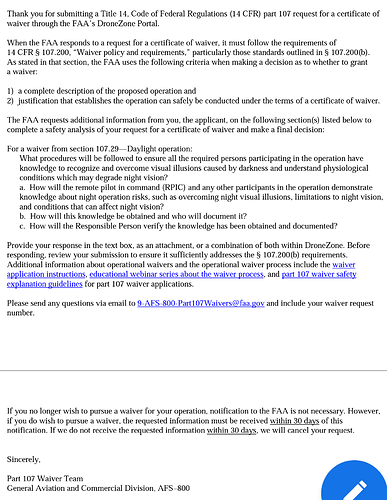 This was my response to the letter and to my excitement the waiver was approved!

Maybe this will help someone trying to apply for a waiver.