Some time ago I was on water and the battery had 3.7 volts and 67 % charge … when the drone decided to land. It took him 7 minutes to land, I had to chase him with the boat and wonder why on earth he would do that. Anybody has an idea what might trigger an emergency landing when at the most a RTH might be appropriate (that I could cancel in the end). 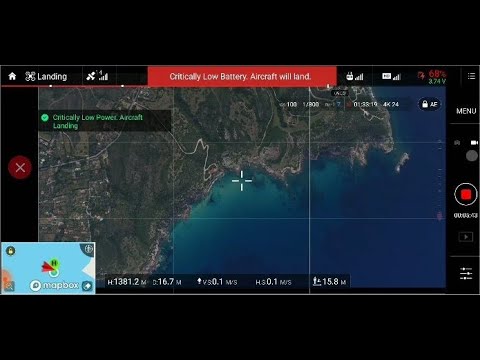 Here is a video from the drone’s site. Sorry for cursing.

Anybody has an idea what might trigger an emergency landing when at the most a RTH might be appropriate (that I could cancel in the end).

I wont bother to comment on the altitude and I think you know why. That said, it is possible your battery had an unbalanced cell and the FC commanded the autoland. Videos do not tell the story. We need to see your flight data. You can upload that to this link: https://www.phantomhelp.com/LogViewer/Upload/
Share a link back here to the upload if you need assistance.

Thanks Dawg ! Still camping down here and no chance to extract the flight data, but as soon as I will be back home I hope to find out more. Getting to know these things my main question is: How smart are they really? Your suggestion implies that somehow they check the status not just of the battery but also of the cells. I am not using that battery anymore, but in this case, if he knows a cell is suspicious, should he not tell me so? My best guess, so far, had been that it auto landed because of a fast rate of voltage decrease, even if still at 3.74. But if e.g. it dropped from 3.84 to 3.74 in a short time lapse it would be wise to see that as a trigger to land … Last question to you: Is there a way to do some diagnostic on the battery other than analyze the flight data ? Thanks again for your help !

Is there a way to do some diagnostic on the battery other than analyze the flight data ?

Short answer. Not that I am aware of. The Flight data will give you each cell value other than relying on the average value.

I too will ignore that height issue…

Battery percentage is not the only thing you should be looking at, but also Voltage. You can have a battery with high percentage left but voltage is low. I was always led to believe that at 3.6 you best be coming home.

But to also answer about Diags. Airdata.com (you can create a free account) will let you upload your flight logs and it does do some battery analysis. To do this you must first sync your DJI logs to the cloud. Then on your tablet or phone get the HDSync app to get them from DJI to Airdata. Msg me if any issues or questions

For example, I was looking at one of my batteries. One of the cells is throwing MAJOR deviations. Knowing that I wont use it for anything important or high (maybe some low height testing at most).

Yes it does help, thank you for your friendly support. Like you implied, flying that high I would not do again so testing is impossible, but the battery I was using that time I have discarded. I actually thought the critical voltage was around 3.4, will change that figure in my mind to 3.6, which was the reading when the landing was initiated.

The 3.6 volt issue I must say i’m not 100% sure, but something I was always led to believe. I’m also a cautious flier. Btw what I meant was at 3.6 you are ok but should consider coming home soon (if you are far away).

Regarding your battery, I forget the age of it. Don’t toss it away just yet. Get an airdata.com account upload your logs and see what it has to say.

My gut feeling (others chime in) NOT to toss that battery. Keep an eye on it with Airdata. Also when is the last time you did a deep cycle on it.

When you say signal dropped - controlling the drone or video feed? Again airdata should tell you alot. Got into the notification screen I think and there is the HD player you can run. See how that looks

Regardless airdata is a good tool to have

Can you share the link to the Airdata Flight so we can see the actual log file? If so, be sure and make it “Fully” sharable, otherwise we cant see the actual data.