Curious if anyone else has experienced this before:

Short of the long:
My DJI Mavic Air 2 fell out of sky after 13min of flight.
Just got a black screen, stating signal lost (no obstacles in between), it didn’t return to home (confirmed home point recorded before take off) after pushing button, found drone after extensive search (used ‘find my drone’ functionality). It didn’t land safely, as one leg got busted, and camera broke off gimbal - suspecting it was a FLYAWAY, and drone dropped out of sky.

Detailed story:
I flew my drone perfectly for about 13min, and then got ‘aircraft signal interference’, followed a short while after with ‘RC signal lost’ (less than 100m away from me), and finally totally black screen, with no visuals, ‘Aircraft not connected to RC’. I pushed the Home button and waited, nothing happened. After judging the battery must’ve run out, I used ‘find my drone’ to go to the last recorded GPS point. Searched for a LONG time, and eventually found my broken drone in thick bushes, with no more battery. The camera has broken off the gimbal, props got damaged, one stand of one front leg is destroyed. The drone must’ve fallen out of the sky (opposed to landing automatically).

If anyone could give some advice, would much appreciate it! 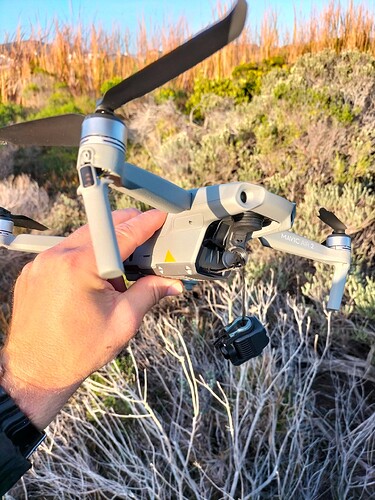