DJI Mini SE Found in California near a Lake

I was on eBay and found this listing, the seller found a DJI Mini SE while hiking around a lake in California in May. The seller lists the serial number as 4CQCJ970031J7V. If you lost your drone and this is it, the $50 selling price might be considered a “Cheap Finder’s Fee.” 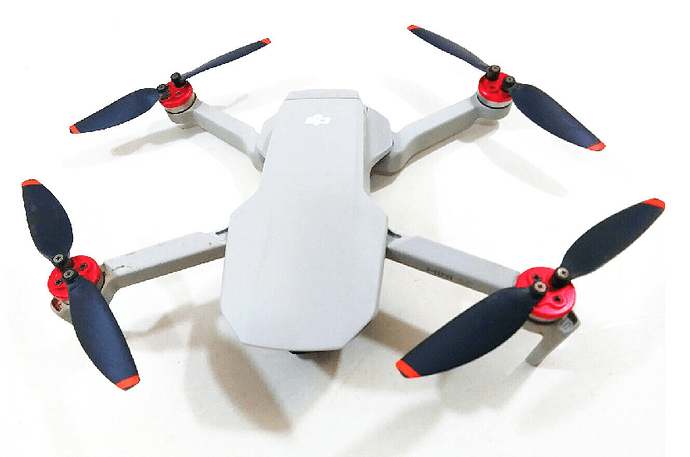 For those members who might someday be in this same situation, here is an update. I wrote to DJI and asked them if they had this Drone registered and if they could notify the owner it had been found and was available on eBay. The eBay sale price and the Care Refresh Replacement price is cheaper that a Fly Away Replacement Price.

Just to be clear, I am not the one who found the Drone nor am I the one selling it; I just saw it on line and if my drone had gotten lost, I would want to know that I might be able to recover it. My Mini 2 is registered with the FAA and that information and my home phone number is on a label on my Drone thanks to the Pilot Institute’s Free Labels…

Here is the Email that I quickly received back from DJI; they did check… I do not understand that the link to the eBay sale did not work for them, it worked again for me… 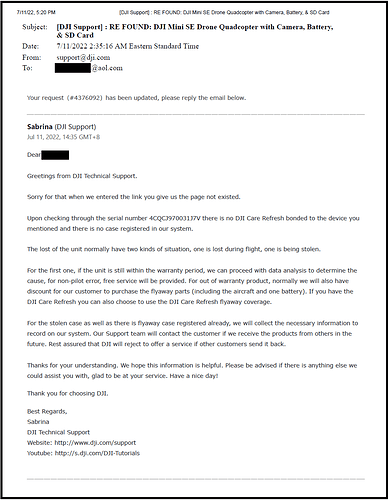 Great News, DJI Found the Original Owner (OO) and it proves that it works to contact DJI directly…

I contacted DJI Support and wrote them that I saw this auction on eBay. I knew the Mini SE could not be that old as they have only been for sale for a short while. I also thought that the drone might have been covered by Care Refresh and the original owner might have collected under the Fly Away clause, or perhaps, the were still going out each week to try and find their missing bird before filing a claim.

After I contacted DJI, they searched their database and found the original owner and notified them about the sale.

Now, it’s up to the OO to determine if they want to contact the seller and ask for it back or bid on the bird, hoping to win as the claim for a damaged bird is only a fraction of a Fly Away.

One final note, the seller said there were no markings on the drone and that is why they listed the serial number.

Moral: If you do not want anyone to attempt to contact you that they found your lost bird, then do not put your name and phone number on it… NOT!

My Mini 2 carries one of the Pilot Institute’s Free Labels with my FAA Registration Number and home phone number… YES! 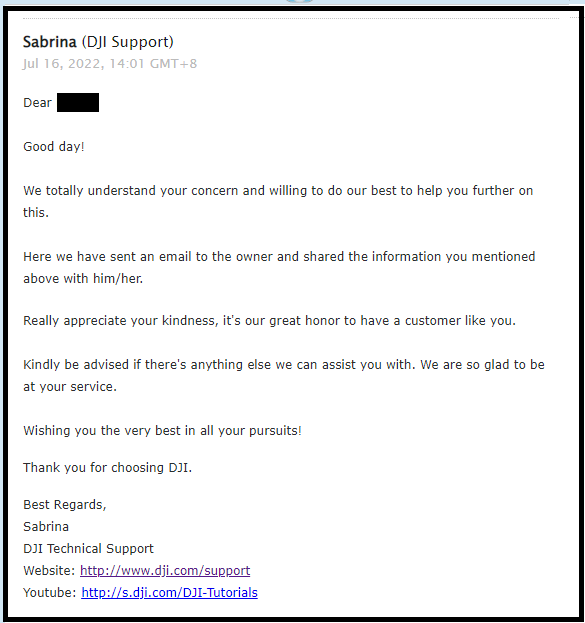