I just bought a mini 2 and I have a samsung galaxy s9plus. The fly app will not download to my phone. Is there anything i can do. I talked with dji and they said they would get back to me. Still waiting. well I got the fly app to download but know my phone will not open the file. any ideas.

In your security settings are you allowing apps not downloaded from the Google Playstore or Samsung app store to be installed?

What security settings are you talking about.
Where do I find them?

On my previous Android phones there was a specific security setting you had to turn on to allow downloading and installing any non-Playstore apps. However, I am using a newer Motorola Moto G Fast running Android 11 with the DJI app. It no longer has that setting but seems to have automated it into the OS. When I first downloaded or tried to install the DJI app. a message was displayed telling me the app was not being downloaded through the Playstore and if I continued with the installation I assumed any risks with it. Once I approved it the app was installed and has updated OK too. It is a 300+MB file and can take a few minutes to download depending on your internet speed.

What security settings are you talking about.
Where do I find them?

From your smartphone or tablet running Android 4.0 or higher, go to Settings, scroll down to Security, and select Unknown sources . Selecting this option will allow you to install apps outside of the Google Play store. Depending on your device, you can also choose to be warned before installing harmful apps.

I may be mistaken but I don’t think that setting appears anywhere in Android 11. As I mentioned in my post, I believe you’re queried automatically by the OS and must approve the download after a warning.

The instructions I gave earlier were for my old phone, it happen to be turned on… It’s Android 8.0.

I fly my Mini 2 with my Samsung Galaxy S2 Tablet (Android 7.0) and it is the only item I have that will run the DJI Fly App. My old Galaxy J7 Sky Pro phone will not run the App, nor will my new phone a Galaxy A02s which I have not yet activated. But the A02s is Android 11 and this is where I found the permit installation of unknown apps: Click the Drop down Menu for Setup; Scroll to and Click on “Biometrics and Security”; Scroll to and Click on “Install Unknown Apps”…

I cannot go any further as the App will not load… But on my S2 Tablet, when I loaded the Fly App, the Tablet came up with a warning that the source (DJI) is not a Playstore App, but the warning contained the link to the Enable Switch.

On my Tablet, it’s Click the Dropdown Setup Menu, click “Lock Screen and Security” then scroll down to the Switch labeled “Unknown Sources” and Turn On (Enable…) the Switch. After I have turned on the switch, it disables when I restart the tablet, I guess a “Safety Feature”

If this doesn’t help, try Googling different versions of “how to enable download Apps in Android 11”

As a final thought, even if your phone or tablet meets all requirements (64 bit processor and Android 6.0 or better), the manufacturer of your phone might have done some “tweaking” to Android to take advantage of some feature they’ve added. Almost all phones and tablets are identical. To distinquish them from each other, the various manufacturers add capabilities to their phone to attract customers and something they did might interfere with the running of the DJI App. The App is really powerful and DJI has certain expectations in the phone or tablet so it works properly. I learned this from one of the YouTube Videos from Drone Valley. 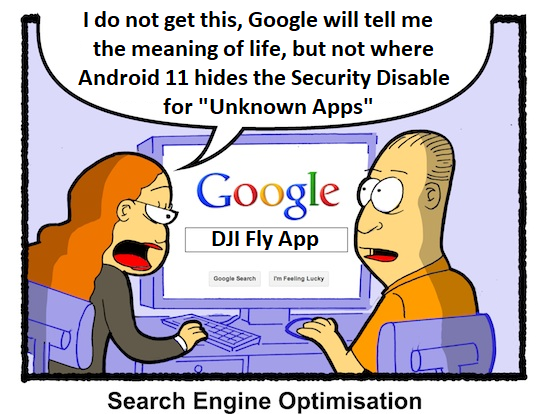 If it’s any consolation, I thought it would be great to get a drone (it is!) and I envisaged myself flying above the tree tops of the local forest, etc. So, I bought a Mini 2 - so far, so good! Then I found out that my phone is pathetically inadequate (my ex wife used to say something similar about me!) and so I bought a ‘Doogee’ S96 (8GB) at a whopping £300. It worked beautifully! However when I had a big ole camera round my neck and was in the middle of changing lenses at the time, I answered a call. However, when the call ended, I cannot definitively remember putting the phone back in my pocket, even though it was quite bulky? I suspect that it is now either at the bottom of the Thames (I was on Westminster Bridge at the time) or in someone’s kitchen drawer? I suspect that I left it on the parapet of the bridge? Anyway, DJI have a list of compatible phones and tablets, but the tablet I have (Lenovo M10 Plus) isn’t on there but it works just fine and now I’m wondering if the opposite could be true?

DJI have a list of compatible phones and tablets,

If you are looking for a replacement for your phone, check out the list provided below. Many of the phones and tablets that work perfectly with the DJI Apps have not been tested by DJI and your fellow flyers tested these and found them satisfactory for flying. You will need to do more research on any item that you might be interested in purchasing new or used.

Just because the DJI Apps work, do not mean that they phone/tablet is a good match with outside use in the bright sun. As you wrote, “I envisaged myself flying above the tree tops of the local forest, etc.” and if the screen is not bright enough to see what is happening, then it is not a good choice.

I wrote how my old 2016 Samsung Galaxy S2 Tablet works very nicely with the DJI Fly App and the screen is bright enough to see in all but the brightest sun (the S2 has a Super AMOLED display, with a 2048 by 1536 pixel screen, rated at 420 NITS).

I checked the UK eBay web site and these Tablets list used for as little as 30 pounds and up. Here is the US; they list for twice that amount. I am not sure why they are cheaper in the UK so I advise you check the specifications between the US and the UK versions very carefully, the UK version may be a less powerful version…

To see a very comprehensive list of usable Phones and Tablets, look here…

Thank you, Loud Thunder - this is extremely useful information.
Lozza.