Good morningI would like to buy a tablet and the almost chosen one is the XIAOMI MI PAD 4 LTE.It has GPS, accelerometer, gyroscope, magnetometer and light sensor.But I can’t find anything in relation to the digital compass. I’ve searched and can’t find any information.So that the DJI GO 4 application works well, does the tablet not have a DIGITAL COMPASS, will it affect you?I very much appreciate the reply.Cheers

It has GPS, accelerometer, gyroscope, magnetometer and light sensor.But I can’t find anything in relation to the digital compass.

You don’t need any of those functions. Truely all you need is wi-fi.

Wi-Fi only ? for using DJI GO 4 Wi-Fi, regardless of uploading or downloading flight data to DJI.
But the maps we see when we pilot as they know from the north, south, do not use the digital compass of the tablet.I apologize for my ignorance in this regard, but I would not like to invest the money in the tablet and that when I connect the tablet to the station, I cannot pilot correctly.

But the maps we see when we pilot as they know from the north, south, do not use the digital compass of the tablet.

Those are the directional headings transmitted from the aircraft. They have nothing to do with tablet. The maps will reflect those orientations.

So your opinion is that due to the fact that this tablet does not have a digital compass, when you connect the tablet, the maps that appear on the screen with the DJI GO 4 application, everything will be correct and the map will be placed so that I can guide perfectly without major problem. Is DJI GO 4 the one that informs on the tablet where the cardinal points are and not the TABLET?

Is DJI GO 4 the one that informs on the tablet where the cardinal points are and not the TABLET?

Correct. The app displays the points as transmitted from the aircraft.

So thank you very much. In the PHANTOMHELP, where many mobile devices and tablets appear, precisely this tablet appears well informed, but this digital compass had something misplaced.I will ask for it before there is no stock.Greetings from Galicia, Spain

I do not think, well its incorrect.

In the Go App the attitide / compass indicator gets info from the drone and from the mobile device.

If both compasses (drone and device) are calibrated and oke, than the red arrow gives heading correct to the outer ring setting.
Arrow in the map is correct to the orientation of the map, map display is N on top, so for that you do not need a compass in the mobile device.

So only wifi is not enough if the ‘pilot’ wants to use the compass in the GoApp.

Well, it already leaves me uneasy. I’ve asked BANGGOOD and it’s on its way. But then as it is possible that in the help to find the tablets for DJI MAVIC devices and others, the XIAOMI MI PAD 4 appears with good references. Do not use the compass to guide you?
According to you, then since this tablet does not have a digital compass, when I run the application, I will not be able to guide myself on the DJI GO 4 map and can only guide me through what the camera sees?

I have a Mi PAD4 celluar, with compass.

Ok, that is very confusing and makes no sence. The tablet has zero to do with the aircraft directional indication, other than the app itself. The directional indication from the aircraft is visually displayed, regardess of what the tablet or phone orientation is. The device really only needs in addition to wi -fi ( which would be for caching maps ) is GPS location data. But that as well has nothing to do with the aircraft oreintation in reference to the device. That would be used for setting the RC location as a home point. Other than that, an onboard “device” compass is useless.

Nah, you are wrong. Device compass is very usefull for the GoApp.
I see sometimes YT video where screenrecording of the app is seen, often in range checks and where the mobile device is not correctly calibrated.

The white arrow is always on top of the outer ring. The N sign gets its orientation from the mobile device. Better check flight yourself, if you have a device with a compass.

Position craft to a heading wich is known by you, i.e. dead East.
Stand behindthe drone (drone facving away from you), fly some distance forward.
Now you look at the tail of the craft.
Rotate yourself (RC+device) left or right and see what happend.
The N sign is moving, arrow direction of drone (info from drone) does not change.

This is really usefull if flying not in LOS and you do not really know where the drone is, rotate your RC and see the red arrow moves to the left or right in the compass. When the red arrow is in line with the center and the white arrow your drone is flying in front of you.

In the picture drone is about heading 310, my RC+device is pointing right of the drone in the air.
So if i turm myself little to the left the arrow comes inline with center and white arrow.

BTW if compass device gives the wrong info, than its difficult to find craft in the sky. BUT turning craft towards the center (red arrow point to HP) will always fly the craft to home in straight line.

For the map use just align craft with the connecting to home line. As the map is always good orientated it does not need the device compass info. 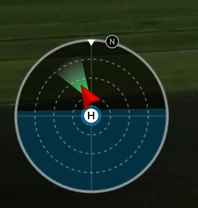 Thanks for the info. I do use the search for the drone when due to sun, or temporary loss of the drone, I have a red and white arrow match, and in that direction is the drone.
Well, now there is no solution, there is the tablet MY PAD 4 on the way. At least I can use the map.
In the characteristics of the tablet I have not seen that it has a DIGITAL COMPASS, although it has GPS, magnetrometer, gyroscope … and it is a pity since being a tablet the map will appear on the screen on one side and the compass on the other side . When I arrive I will check what we are talking about.
Thanks for the clarifications.