Hi, my Spark decided today to go on its own mission and now is lost.

Can somebody perhaps assist me in trying to locate it, would be highly appreciated.

This is no fly away, there is no such thing. There is always a reason. I just took a quick look at your data, from 64.6 second or so in to the flight you began to have compass errors, yaw errors and speed errors which are initial indications of launching from a point with metallic items which will in turn throw your compass off. Without looking in to further detail, that would be my first thought, although granted with further analysis that could be proven otherwise. With given time, I could plot your search area, however there are many around who can do this as well.

Open up DJI GO 4 app, then click on the three bars on the top right-hand corner and then click find my drone it’s that easy! Hope that helps good luck and let me know

That won’t be effective in this case, due to downlink loss and drift @ 140ft.

This one will be most difficult to locate. The graphic below shows your position at the last data point. ( Red Arrow ) The Spark was at an altitude of ~140ft and drifting with the wind at ~ 6 m/s. Taking this in to account and the fact that you still had 84% battery, this would be a very long drift. Also assuming the same direction that it began drifting it would have drifted to approx the location of the yellow circle within 5 min. You most likely had more battery remaining so the AC would have continued to drift until auto land which could be much farther than shown below. This is making the assumption that the drift did not deviate from the direction shown. I doubt that you will be able to locate it, but good luck to you.

@Eben, if your Spark disconnected from the remote controller at the end of the flight log, it would have landed about 20 seconds later. That would be somewhere inside of this yellow box: 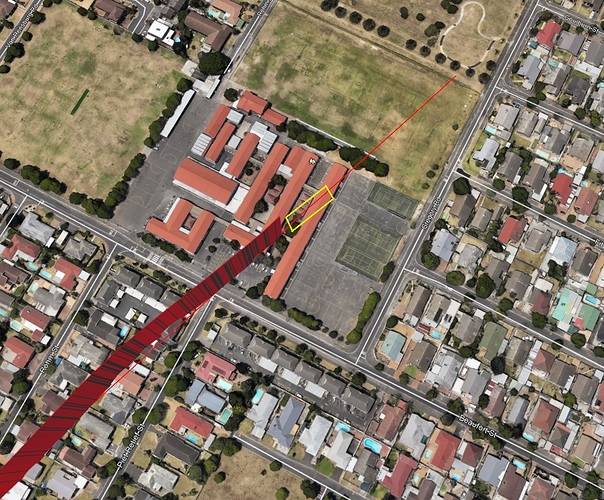 Try searching in that location first. If you don’t find it there, then continue following the red line beyond the yellow box. It should have landed somewhere close to that line.
1 Like
Eben October 1, 2018, 11:38pm #7

Not there but thanks for your effort.

Where did you look?

The Spark I had before this one had not problem taking of and landing from that same spot. The only reason I sold it was because I got a nice deal on Gearbest.

In both suggested locations in the post and surrounding areas.

The school principal was very helpful and organized me a ladder and searched everywhere on the roofs etc.

If the remote controller disconnected at the end of the flight log, I doubt the Spark flew beyond the field behind that school. It should have landed somewhere along that red line.

Maybe someone found it at the school and picked it up?

Got a new Spark which I will use to try to find it since it’s school holiday here in South Africa and the school is locked down.