Did I ever have GPS lock before I took off?

What I can I learn from this experience?
link to DAT and logs
https://drive.google.com/drive/folders/1qysApT7-XnhVQSJY67toEHkdXCHUxOQd?usp=sharing

You only added 2 DAT files. Not the original .txt file.

The .txt is not in the list of files. So unless you uploaded to a different directory, then the answer is no.
Try uploading the .txt file to the log viewer at the link below. Then we can get the original .txt from there if you share that link back here.

There are several things about this incident that suggest that it was caused by geomagnetically distorted launch site. Probably because the pier under structure contained steel which was then close to the MP…
At -23 secs the MP went from reasonable values of magMod and Yaw-magYaw to problematic values - I’m betting this is when the MP was placed on the pier in preparation for launch.

image827×257 7.9 KB
Also, the pink background indicates that the MP never switched to GPS_ATTI.
Another indication of a compromised compass is the flight path 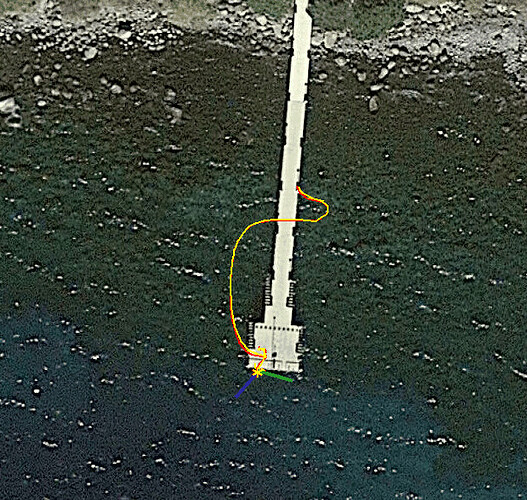 These observations and a few others all point to a geomagnetically distorted launch site. But, the MP was in ATTI (not GPS_ATTI) and should have been impervious to an incorrect compass. I.e. it’s only GPS_ATTI mode where erratic flight can be caused by the Flight Controller attempting to correct position based on incorrect compass data.

That said I still think this incident would not have occurred if the launch was delayed until the controller indicated that GPS_ATTI mode was in effect.

@BudWalker Thank you very much for the post-mortem.
This is very helpful.

Where are you guys finding these files? I can’t see any of them and would like to “play”.