Another Spark says goodbye, need help where it might be

Not going to complain, nothing but problems with this Spark probably a few years ago when it had its first crash, All I would like is if someone could figure out its last position, based on the maps it was only a few blocks away, and I looked exactly where it showed its last data point and possible path, after hours of scouring the area no Spark found. Waited for low tide and walked through 10" of mud with no sign of the Spark. This is a large wooded area adjacent to a Large Ocean Tidal waterway, she was not found this time. This was in Maine, nice and open area, launched from a lawn, weak GPS I dont get it , 11+ satellites in the Maine sky???

Of the many issues this aircraft seemed to have during this flight, judging from only the last point in the data and the violent attitude angle changes, I would suggest you look in the tree tops. It looks like you hit something. 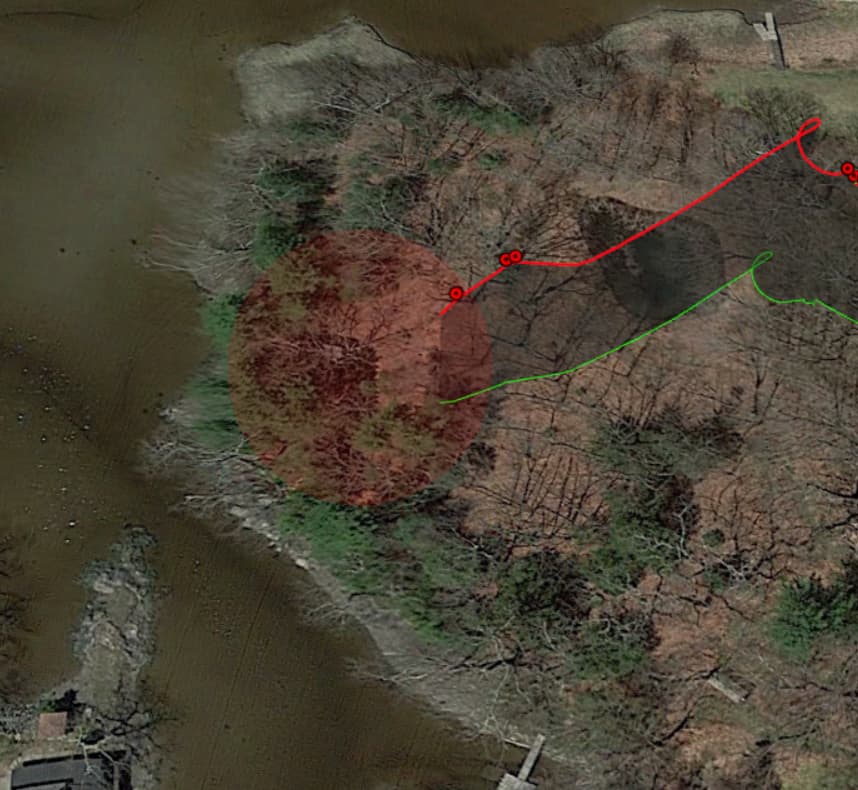 Drone was found, I left info with some home owners, within 1 hour someone called me and found the Spark, it was upside down, got rained on possible but seems it weeped out, let it dry out next to a large dehumidifier and filtered air purifier, she looks and boots OK except a semi bent blade, the Spark recorded the crash video and still recorded video and tried to run the rotors, it recorded upside down for 6 minutes after crash. The crash site I was told was not where the flight data showed using Google earth data sent last location. Drone was near the house on the right in the back yard edge so the data it sent was not complete it flew to the right some more. I just went up to above tree line and that was it drone just zoomed off, obviously I tried to control it but lost visual quickly.

How can I confirm GPS is working to its specs?

The crash site I was told was not where the flight data showed using Google earth data sent last location.

That is obvious. You lost signal after that last hard maneuver. I suspect that you simply clipped the trees, since the aircraft travelled farther. There is no data after signal loss, and the fact that It was in ATTI mode and drifting, that makes sense. Your other issue was the compass. You had numerous YAW, SPEED and Compass errors after around 18 seconds or so. Which either means you took off too close to a metallic object or the aircraft had been stored in a magnetically distorted place and caused the compass to be off and confused, to put it in laymans terms.