Had two great flights from the same home point just before.
On the third flight, I got into trouble flying over a low parking garage.
Spark drifted from yaw errors and I repeatedly pressed RTH which it finally did after getting GPS back.
While doing the RTH precision landing, at 2m 48.4s, the AC just drifted quickly to the side for no reason into trees while with 19 satellites.
Luckily, I just lost 1 prop and the AC fell to the ground without damage.

I can probably understand the Yaw error from interference form the garage but why the sudden pan to the side while landing with 19 satellites?

I thought the explanation would be straight forward. Specifically, that navHealth (aka gpsHealth) was low. But, it’s 5 when the incident occurred. Can you provide the AC .DAT so that we can take a look. Look here to see how to do that.
Retrieving a V3 .DAT File from the AC

why the sudden pan to the side while landing with 19 satellites?

After your Spark started landing, it attempted to correct its position using the Precision Landing feature. You can see that in your flight log at 2m 47.6s. A message was also displayed at the top of DJI GO. That feature is not foolproof, so you should be ready to tap the throttle to cancel Precision Landing if it’s not working as expected (like in this case).

DJI GO does not allow the downward sensors to be disabled. If you want to disable those sensors, you can disable the “Vision Positioning System” setting in Litchi. That should keep the sensors turned off until the next time you install new firmware on the Spark.

I did notice it drifted after it started precision landing.
However, going over 50ft at 8mph to precision land when 2ft from the home point I thought was abnormal and it only stopped at 50ft because it hit a tree 33ft up.
Very strange I thought…

Thanks for looking…
I got the DAT file but I’m not sure how to share it at Phantomhelp.
Do I need to use any online file share service and link to it?

Here is a link to the DAT file:
https://1drv.ms/u/s!Ar7NEmhzuMvBgYpCUWqhsLRQR47IPQ

The .DAT didn’t reveal anything that I could see. I agree with @msinger. The .txt shows the App tip
“Precision Landing__Correcting Landing Position” at 167.6 secs which is exactly when the Spark started it’s eastward movement.

Ok, thanks for taking a look.
Will cancel the “precision” landing from now on to avoid a possible 50ft + correction…

The .DAT didn’t reveal anything that I could see

Are you referring to the yaw issue? Or weren’t you looking at the yaw vs. magYaw data?

I suspect that the image processing done to pick the HP got confused and it went searching for the HP. We’ve seen this happen when the HP was a grassy field - it has a hard time picking out just those blades of grass that are the HP.

There are a couple of possibilities why there are no log data that would show what happened during the Precision landing. 1) DatCon just isn’t smart enough . 2) More likely is that data is in one of the files that ExtractDJI ignores since there isn’t any way to process them.

From the image it looks like it’s possible that the HP was partially shaded from those trees. Possibly it was windy causing the shade to move about while the Precision landing system was trying to pick a spot.

No… I just didn’t see anything that would cause the eastward movement. I think you’re observation about Precision landing initiating at exactly the time when eastward movement began is the right one.

The Yaw/magYaw separation began when the Spark got caught up in the branches and started flailing about. That started about 172.1 secs as shown by the accelerometer and gyro data.

From the image it looks like it’s possible that the HP was partially shaded from those trees. Possibly it was windy causing the shade to move about while the Precision landing system was trying to pick a spot.

That’s what I was thinking too.

Any ideas about the yaw error at 0m 52.6s in the flight log?

I see what you’re saying.
Next time I’ll make sure to take my launch pad and hopefully it’s bright colors will help distinguish it everything else around.

At 52.6s, I just started to fly over that low parking garage so my only guess is that the metal in the structure caused compass interference.

At 52.6s, I just started to fly over that low parking garage so my only guess is that the metal in the structure caused compass interference

The Spark was not close enough to that structure for it to negatively affect the compass. Magnetic metal objects should have no effect on the compass until they are less than a foot away from the Spark.

Very strange then.
The 2 flights just before were perfect but I’ll have to redo IMU and Compass calibration to be safe.
I’ll try to repeat the same flight at some point at a much lower altitude as a test.

I didn’t notice the switch to ATTI at 56.2 secs. More interesting is the toilet bowling that happened starting at 21 secs. 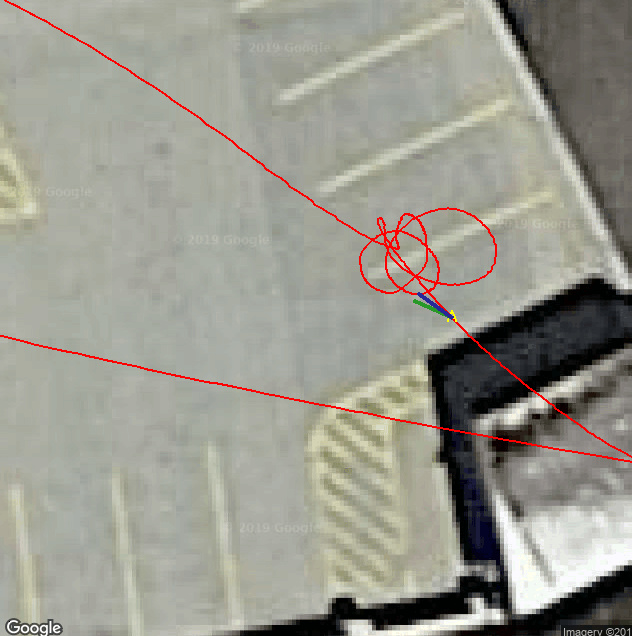 Funny thing is I don’t see any toilet bowling in the video cache.

Is there a video to share? Or, are you talking about the still images that the Go App stores in the .txt? If the latter, then there are probably not enough stills to discern the toilet bowling.