Hi, I lost contact with my Mavic Air today. Good line of sight. Only about 650m max. Plenty of battery. Only just managed to get a signal to turn it around and get it back before battery ran out. I have downloaded the log. How can I get someone to look at this and tell me what went wrong please?

Not really sure what you are looking for here. According to the flight log you only lost signal for 1 second at the farthest end of the flight path. Even though you were high enough, I suspect this was due to the terrain. It appears flat but it is not. The area in RED below according to the GE elevation is higher than your launch point. The area in BLUE below is much lower than your launch point. The combination of that plus the building in the direct flight path most likely was disrupting your signal somewhat. Overall however there is really nothing wrong here. 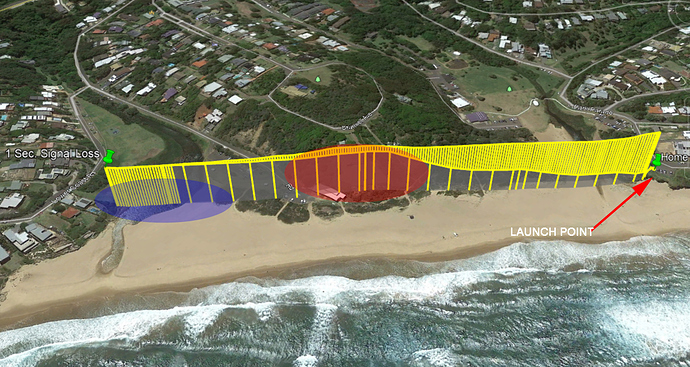 Thanks for the rapid response. Very kind of you to have a look at this and get back to me.

I had set the flight up to do a hyperlapse. The drone was drifting along at 1m/s and taking a photo every 10s for me to string together in a video. The flight path is one I have done many times before, and gone even further south than I did on this occasion. the launch area is 14m above sea level and the drone was another 20m above the launch site. The building is not tall at all and the drone was way above it.

There was no loss of video transmission. I got the first ‘signal lost’ and tried to disable TapFly and stop the photography but couldn’t. The signal lost message kept on going on and off and I couldn’t stop the drone from continuing. Meanwhile the battery was getting low. I also tried the RTH button, with no effect. I stood on a table at the headland to see if this may improve the signal but it didn’t seem to. At one stage I got a signal for about 2s and managed to turn it around so at least it started to slowly come back and the signal strength improved.

the flight path runs along a beach and there is clear line of sight all the way to the southern headland, even from the take-off point. As mentioned above the drone was about 20m above the headland (and so 30m above sea level) so there could not have been any interference from topography.

Its interesting how the data stored don’t seem to reflect what I was seeing and experiencing. There was more than one signal lost message. Indeed, there may have been half a dozen (I didn’t count as it was a struggle to get control of things).

Its a cool image you created!

This is what I was trying to do. Same path a few weeks ago.