https://www.phantomhelp.com/LogViewer/62553VDR1DYV1KXINAMA
i have no idea how to calculate the flight path with the insane wind yesterday. i learned a huge lesson yesterday. if anyone could help me find this drone i would be extremely grateful

Assuming all variables remained relatively constant, at a speed of ~13mph and an autoland descent rate of ~2ft/sec that would place the aircraft somewhere in the vacinity of the red circle.
That said however, being that the battery was so low, it could have reached the shut down point before that, during the descent. Also taking in to account a small rise in elevation in the path, it could have impacted near the midpoint of the decent. You have to consider the variables and the lack of additional data to make this a “guestimate”. 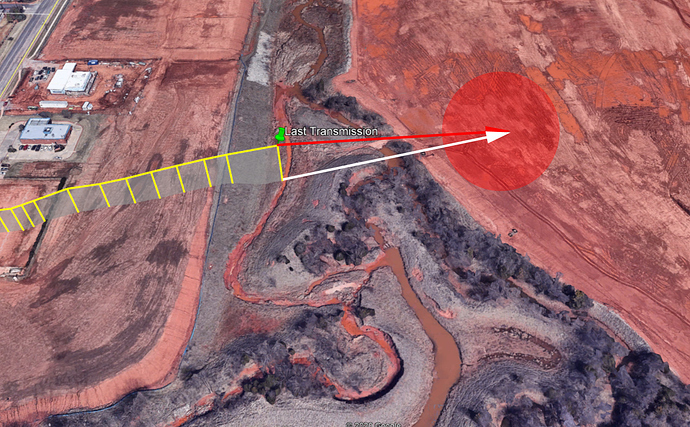 Sad. Unfortunately the word “wind” and the mini just don’t mix.
Hope you find it.

Go into your Dji app. In window that shows your drone model. In this prod white window top left ‘click’ the drone pointer icon. You should then enter a black background window which is your flight record window. Slide from bottom upwards to see all flight records and choose the date of flight. This should show you where your drone wentand where it landed?? Best of luck.

This should show you where your drone wentand where it landed??

You wont see the proper location due to loss of signal. The last position as shown above is the final position location per the logs. The aircraft was in autoland and being blown farther away by the wind.

Too late now… but this is why I have my name, address and phone number on my Mavic (with apologies too).