Ok now we are getting somewhere. I don’t know how you found that data but I’m glad you did. Now there is some kind of data showing that something happened. My neighbor said he saw something hit the drone but he wasn’t sure what it was. I was flying at 192 feet so I know it wasn’t a tree. But it is possible that a bird hit the drone. I would have thought that I would have noticed my drone spinning around but I never saw that on my tablet. I will try to get the aircraft data and upload that info as soon as I can.

The reason I edited this, is because this spin was not reflected on msingers flight animation, although this data shows a quick spin around. It should be the same file reference. So that confused me a bit. But in any instance, this does show a spin @321.4 seconds. This could also be a data anomoly of unknown origin.

this spin was not reflected on msingers flight animation

The flight animation is showing the yaw 360 value (not the yaw). The aircraft didn’t really spin at those points in the log. You’re just seeing the yaw value cross the 180 degree mark. 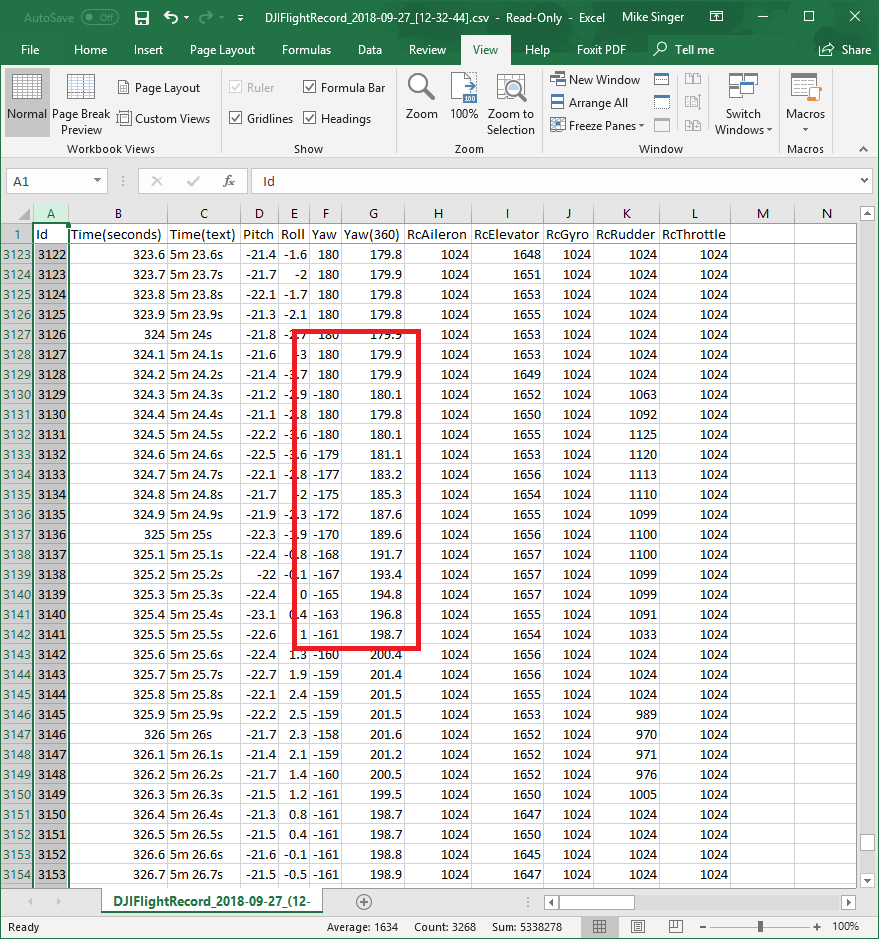 If the drone actually struck something, the pitch and roll values would show an abrupt change.
Fly_Dawg September 30, 2018, 4:39pm #25

I realize that you would normally see an abrupt change in attitude with any sort of impact. That is why I started looking at the yaw values, because the other values looked just fine. And as quickly as this data ended, there is usually at least one or two significant variances in the data points around 200-300ms prior to the end of the logs. Not so in this case, it happened so quickly. And as for the yaw values, yes that got stuck in my head when I looked at the +180/-180…with CSV View. Going back and looking again, I stand corrected. The AC was hovering so close to the 180 degree point, those were bounces back and forth, as you mentioned as shown below.

You guys are find a lot more information then I ever knew existed. I thank you both for taking the time to look at it all. To be honest I don’t know what all this means. If the data shows a sudden change in the yaw what could that be. I never saw the drone spin and the flight record I saw did not reflect a spin. Saw what is the yaw data telling us.

Correct, there was no spin. The above graph shows the refernce between the data +/- 180 degrees vs 360 degrees. So we are back to needing the aircraft .dat file.

I was able to get the flight record from the aircraft using DJI Assistant 2. I am unable to download it to this forum. The file is encrypted so it means nothing to me. I tried using the same thing I did for the other flight record but that didn’t work either. How can I get this file to you guys so you can see it.