I received a battery warning after which a message saying the drone will return home. I canceled this. I am not sure what to tell you but this definitely happened. After this, I continued to fly the drone, took a few more pictures, and then began my return (manually). While coming back home, I lost all connection and visual. I however continued to apply stick inputs (throttle and pitch). I know the area by heart so I had an idea as to the location, direction, etc… of where I was in reference to home. After perhaps 20 - 30 seconds, I stopped applying stick input.
At this time I got into my car, opened the flight record, and went to the last known location (which wasn’t far from where I was). Would the Home location change if I moved with the controller?

Thanks sar104.
I did search right around the “landing point” (as this was the last known location), but I could not find it.

RTH is not initiated until after the remote controller signal is lost (not the visuals). However, in this case, your Mavic would have continued landing since it was already landing.

It began to land because the smart battery and FC calculated there was not enough remaining power for RTH. As stated above, when this occurs the aircraft will autoland where it is. This cannot be cancelled.

I continued to apply stick inputs as you mentioned (for say 15 - 20 seconds), but I do not know if the aircraft received them or not. I was flying blindly… no visual on my phone.
What I should have done (looking back now) is look at the RC and check for anything unusual or if I still had connection, but honestly I went into a mode of panic when I lost connection hence I wasn’t thinking very clearly.

I continued to apply stick inputs as you mentioned (for say 15 - 20 seconds), but I do not know if the aircraft received them or not.

Your DAT file ends in the same location as your TXT file. The Mavic most likely landed somewhere around that location. Maybe it landed in a tree or someone else picked it up?

I checked the full area: trees, bushes, etc.
I still haven’t checked the right part of the yellow box that you first sent.

After I lost the drone and spent time looking for it, I figured there is probably a 5% chance someone took it. Now, after all the information received and investigation done, I believe there is a high chance (60-70%) that someone took it. But again why would someone take it - sell the parts?
Every RC is linked to a specific aircraft correct - the drone cannot be flown with another RC?

why would someone take it

Maybe to reunite it with owner?

Every RC is linked to a specific aircraft correct - the drone cannot be flown with another RC?

Any Mavic Pro remote controller can be linked to your Mavic Pro.

The aircraft was never in RTH mode. It was in P-GPS for the entire flight until, at 648 seconds, SMART_BATTERY_Battery fell below SMART_BATTERY_landBattery, triggering autoland at 652.3 seconds. It was then in autoland until the log ended.

The aircraft was never in RTH mode.

Then there is something that I am not understanding about the Smart Battery “Go Home” status. Why does this show the status change, twice, prior to autoland?

You are looking at the wrong state variable. The aircraft state is flycState. The various smart battery status values refer to the relationship between the battery level and other parameters

The aircraft didn’t go to RTH when the battery fell below the SMART_BATTERY_goHomeBattery level because that option was turned off. 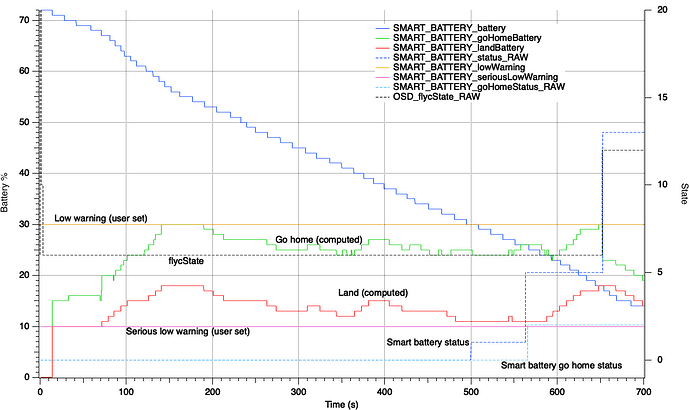 The aircraft state is flycState.

That part I understand. Normally you would see that change as well.

The aircraft didn’t go to RTH when the battery fell below the SMART_BATTERY_goHomeBattery level because that option was turned off.

Now this makes more sense. The status changed as it should, but the flycState did not ( As I noticed on my first look in an earlier post.) It did not actually go to RTH, as it was instructed but the status was there for it to do so. Makes more sense now. Primarily I was looking for the “Low Battery Aircraft is returning home” message that the op stated he received on the device. I think that the OP did not realize that the RTH option was turned off and got the messages confused between low power autoland and the last “Low Power Aircraft is returning home”

I didn’t know that. Thanks

Thanks for all the input gents.

So is this a lost case - is there a possibility that it landed somewhere before the last known location re my Flight Record? Or perhaps somewhere other than where was already mentioned? Any other possibility as to what happened?

I think it’s very likely that it’s stuck in a tree - the Mavics are notoriously difficult to see in those situations. As I said before, I would be very surprised if it is not almost directly below the last recorded point.

That is what I figured as well but it wasn’t to be found. Or it was but someone jacked it -_-
Is there a possibility it is somewhere else - that it drifted a little closer to home or to the left of the last recorded point?

Is there a possibility it is somewhere else - that it drifted a little closer to home or to the left of the last recorded point?

Both of the logs you shared above indicate the last recorded location is where the remote controller disconnected. Since the Mavic was flying at 31 MPH at that point, it’s not going to be exactly at that location. However, if you start at that location and walk toward the direction it was heading, you should be able to find it (if it’s still there).

I will try again but I don’t think it is there.
Anyways, thank you all for the support.

I will update this thread if I do find it.
If anyone has any additional input to share please don’t hesitate to do so.